During it’s preview of Wisconsin Governor Scott Walker’s presidential announcement on Monday, CBS This Morning made sure to cast doubt on whether or not the Republican was “ready” to assume the White House in 2016.

Reporter Dean Reynolds highlighted how Walker “has a reputation as a man who stands on firm conservative principles” before he played up how "[t]he state budget he signed into law on Sunday includes budget cuts that aggravated not only Democrats but also many of his fellow Republicans.”

After he played several clips of Walker touting his conservative record in Wisconsin, Reynolds quickly threw some cold water on the presidential candidate and claimed that “Walker's policies, which turned Wisconsin into a right-to-work state, have not delivered the jobs he promised.”

The CBS reporter insisted that “awkward exchanges” like one with a British reporter “have raised questions about his readiness for prime time” and “[t]o guard against criticism that he lacks a certain presidential heft, the governor has been undergoing weeks of briefs on global issues, everything from net neutrality to ISIS.”

ABC’s Good Morning America and NBC’s Today provided much less coverage of Walker’s announcement on Monday, as both networks included his campaign bid into segments about Donald Trump. ABC’s Jon Karl noted how “if there's any one of them that could be seen as the front runner now, I would say it is Scott Walker.”

During a news brief in the 8:00 hour, Dan Harris reminded his ABC audience that Walker “shot to national prominence several years ago when he stripped unionized state workers in Wisconsin of their collective bargaining rights.”

During the network’s actual coverage on Walker, the on-screen headline declared "GOP Field Widens With Walker; Trump Steals Spotlight as WI Gov. Enters Race." Reporter Kelly O’Donnell stressed how “[f]or Walker, tonight is a very big deal, it will be one of the first opportunities for him to be tested in the national spotlight. And that's going to be one of his big challenges.”

CHARLIE ROSE: The crowded GOP field just added another candidate. Wisconsin Governor Scott Walker tweeted minutes ago, “I'm in. I'm running for president because America deserves a leader who will fight and win for them.” He’ll be the 15th Republican in the race. There are questions this morning about whether the governor is ready. Dean Reynolds is at the Waukesha County Expo Center in Wisconsin where Walker’s speaking later today. Dean good morning.

DEAN REYNOLDS: Good morning. Well the governor will be announcing here later today and he has a reputation as a man who stands on firm conservative principles but it is his record that will be getting a much closer look now. The state budget he signed into law on Sunday includes budget cuts that aggravated not only Democrats but also many of his fellow Republicans and yet Walker was having none of it.

SCOTT WALKER: With this budget the taxpayers come first.

REYNOLDS: The Wisconsin governor has never wavered from his view that an aggressive conservatism works if it’s spelled out to the voters.

WALKER: Voters are serious when they say they want their leaders to take on serious decisions. 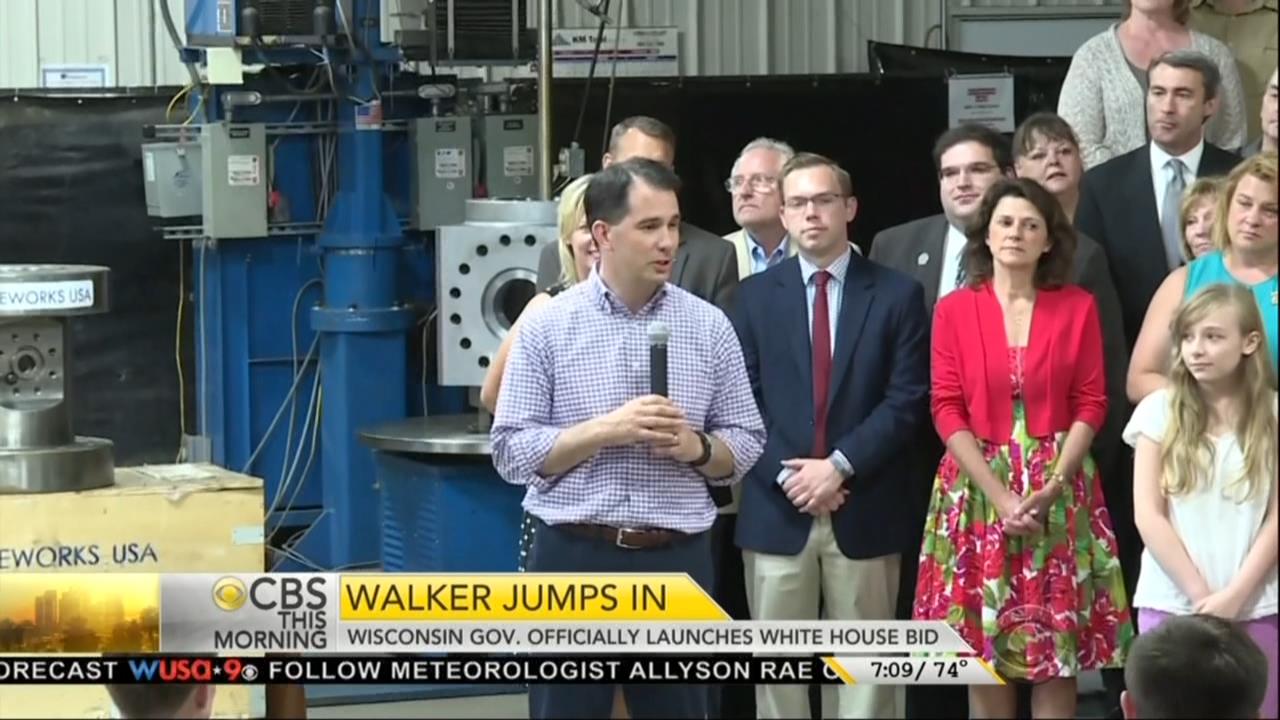 REYNOLDS: The latest Quinnipiac poll gives Walker an 8 point lead in Iowa where a speech he gave in January catapulted him to the first rung of contenders.

WALKER: I'm hopeful to work together with you to help us provide that kind of leadership that is new and fresh and bold and aggressive.

REYNOLDS: But Walker's policies, which turned Wisconsin into a right-to-work state, have not delivered the jobs he promised.

MARY SPICUZZA: He later kind of backtracked and said, well, that was really a goal, and it was an ambitious goal and don't you want to elect somebody who’s going to be ambitious?

REYNOLDS: Awkward exchanges like this have raised questions about his readiness for primetime.

REPORTER: Are you comfortable with the idea of evolution? Do you believe in it? Do you accept it?

WALKER: For me I'm going to punt on that one as well.

WALKER: That's a question a politician shouldn't be involved in one way or the other.

REYNOLDS: To guard against criticism that he lacks a certain presidential heft, the governor has been undergoing weeks of briefs on global issues, everything from net neutrality to ISIS.