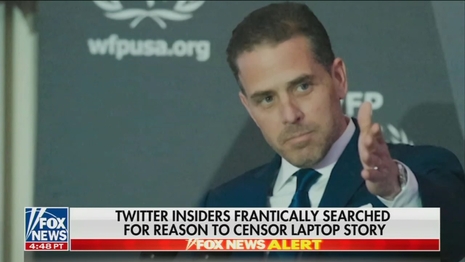 Journalist Matt Taibbi, who first reported on the documents Dec. 2, stated that they revealed how Twitter staff and executives over time found “more and more uses” for censorship tools. Specifically, per Taibbi, “Outsiders began petitioning the company to manipulate speech as well: first a little, then more often, then constantly.” In one snapshot dated Oct. 24, 2020, Taibbi stated that “[b]y 2020, requests from connected actors to delete tweets were routine. One executive would write to another: ‘More to review from the Biden team.’ The reply would come back: ‘Handled.’”

Musk’s release of the documents put an even greater spotlight on the nefarious scheme by Twitter to interfere in the electoral process to help throw the election to then-candidate Joe Biden. MRC President Brent Bozell praised Musk for making Twitter’s internal operations transparent to the American people at last: “Twitter sabotaged the 2020 elections. A big thank you to Elon Musk for releasing more information about this. The American people deserve to know the truth."

https://t.co/j4EeXEAw6F can see the confusion in the following lengthy exchange, which ends up including Gadde and former Trust and safety chief Yoel Roth. Comms official Trenton Kennedy writes, “I'm struggling to understand the policy basis for marking this as unsafe”: pic.twitter.com/w1wBMlG33U

With regards to the laptop scandal, the decision to censor the story reportedly went to the highest levels of Twitter leadership albeit without the knowledge of former Twitter CEO Jack Dorsey.

However, former Twitter legal executive Vijaya Gadde and former Twitter head of trust and safety Yoel Roth were both involved in the decision to censor the story. In one snapshot, Roth claimed that “the policy basis is hacked materials - though as discussed, this is an emerging situation where the facts remain unclear. Given the SEVERE risks here and lessons of 2016, we’re erring on the side of including a warning and preventing this content from being amplified.”

This is especially concerning given Roth’s past statements of wantonly smearing President Donald Trump’s administration as being staffed by “nazis.”

Yes, that person in the pink hat is clearly a bigger threat to your brand of feminism than ACTUAL NAZIS IN THE WHITE HOUSE.

Taibbi reported further that “‘[b]y this point “everyone knew this was fucked,’ said one former employee, but the response was essentially to err on the side of… continuing to err."

Taibbi reported that the “hacked” materials policy basis sparked confusion amongst leadership and staff. Taibbi said: “Comms official Trenton Kennedy writes, ‘I'm struggling to understand the policy basis for marking [the New York Post story] as unsafe.’” In addition, “Former VP of Global Comms Brandon Borrman asks, ‘Can we truthfully claim that this is part of the policy?’” The policy basis for the censorship reportedly didn’t hold weight as a serious decision:

'They just freelanced it,’ is how one former employee characterized the decision. ‘Hacking was the excuse, but within a few hours, pretty much everyone realized that wasn’t going to hold. But no one had the guts to reverse it.’

Taibbi even said that Twitter’s decision to block transmission of the Post story via direct message was “a tool hitherto reserved for extreme cases, e.g. child pornography.”

An amazing subplot of the Twitter/Hunter Biden laptop affair was how much was done without the knowledge of CEO Jack Dorsey, and how long it took for the situation to get "unfucked" (as one ex-employee put it) even after Dorsey jumped in.

In another snapshot showing an Oct. 24, 2020 communication detailing “an additional report by the DNC,” an alleged tweet by conservative actor James Woods was listed. Taibbi summarized that “[c]elebrities and unknowns alike could be removed or reviewed at the behest of a political party.” Taibbi then noted that these open channels for political parties to leverage censorship requests overwhelmingly favored the left:

This system wasn't balanced. It was based on contacts. Because Twitter was and is overwhelmingly staffed by people of one political orientation, there were more channels, more ways to complain, open to the left (well, Democrats) than the right.

Musk teased the release of the documents on Twitter before the release: “This will be awesome.”

This will be awesome 🍿

MRC Free Speech America published a comprehensive timeline for how the censorship of the laptop scandal transpired on Big Tech platforms.

MRC Free Speech America conducted extensive analysis in April utilizing its unique CensorTrack database to reveal 646 examples of how far Big Tech went to protect President Joe Biden from his critics. The number included 140 documented cases of users — including lawmakers, organizations, news outlets and media personalities — censored on Twitter and other platforms for sharing anything related to the bombshell Hunter Biden laptop story. Twitter in particular locked the Post’s account for 17 days. In addition, Twitter slapped a “warning” label on the GOP House Judiciary Committee’s website for linking to the New York Post bombshell report.

MRC Free Speech America’s research on Big Tech platforms like Twitter protecting Biden was so influential that it was cited in an ongoing lawsuit from Missouri and Louisiana against the Biden administration for allegedly colluding with Big Tech to censor Americans.

MRC Free Speech America also demonstrated how Big Tech’s cancellation of the Hunter Biden laptop scandal helped shift the 2020 election in Biden’s favor. A 2020 MRC poll found that 45 percent of President Joe Biden’s voters weren’t fully aware of the Post story precisely because Big Media and Big Tech whitewashed it. Had Americans been fully aware of the scandal, 9.4 percent of Biden voters would have abandoned him, flipping all six of the swing states he won to former President Donald Trump, giving Trump a victorious 311 electoral votes.