Big Tech’s campaign to protect President Joe Biden and his agenda has continued unabated. The Media Research Center found more than 640 examples of bans, deleted content and other speech restrictions placed on those who criticized Biden on social media over the past two years. This included 140 cases of Big Tech censoring people over the New York Post’s bombshell Hunter Biden story in late 2020. 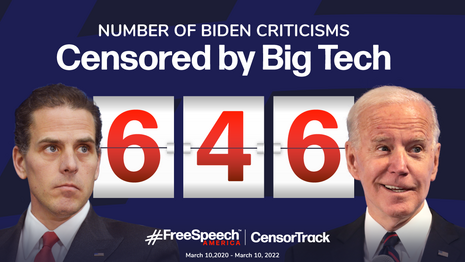 MRC Free Speech America tallied 646 cases in its CensorTrack database of pro-Biden censorship between March 10, 2020, and March 10, 2022. The tally included cases from Biden’s presidential candidacy to the present day.

The worst cases of censorship involved platforms targeting anyone who dared to speak about any subject related to the New York Post bombshell Hunter Biden story. The Post investigated Hunter Biden and the Biden family’s allegedly corrupt foreign business dealings. Big Tech’s cancellation of that story helped shift the 2020 election in Biden’s favor. Twitter locked the Post’s account for 17 days. In addition, Twitter slapped a “warning label” on the GOP House Judiciary Committee’s website for linking to the Post story.

Big Tech even axed those who blamed the current inflation crisis on Biden. For example, Facebook censored Heritage Action, the advocacy arm of the conservative Heritage Foundation, on March 15, simply for posting a video quoting Biden’s embarrassing statements on energy policy. Facebook placed an interstitial, or filter, over Heritage Action’s video, suppressing the post’s reach. The video showed Biden and officials in his administration explaining how his policies would cause gas prices to rise.

But the largest category by far included users who dared to call out Biden's notoriously creepy, touchy-feely behavior around women and children. The 232 cases of comedic memes, videos, or generic posts about Biden’s conduct composed more than one-third of CensorTrack's total instances of users censored for criticizing the president.

In one case, a user reported that Facebook deleted a post that showed three photos of Biden kissing what is reportedly his granddaughter on the lips. It followed with a caption that said: "Find someone who kisses you the way Joe Biden kisses his granddaughter." Snapshots indicated that Facebook claimed the post violated its community standards on “nudity or sexual activity.”

Big Tech even went after posts that quoted Biden’s own words and made him look awful in retrospect. News outlet Breaking 911 posted screenshots of Instagram posts to its Twitter page on Oct. 21, 2021, showing that Instagram targeted the group for quoting Biden. One tweet quoted Biden sarcastically saying "Freedom! ...I have the freedom to kill you with my COVID. No, I mean, come on! Freedom?!”

The second Breaking 911 screenshot featured Biden lambasting former President Donald Trump's decision to leave the Paris Climate Accords. Biden was quoted saying, "When Pres. Trump pulled out of the Paris Climate Accord...the agreement was that we could not, if we reached beyond 1.5°C increase in temperature, we're gone. Not a joke. Not a joke. And so, we decided that, he pulled out - first thing I committed to do was rejoin that accord." Instagram reportedly removed the posts. According to Breaking 911, "Instagram has again flagged the @Breaking911 account for directly quoting the President of the United States, claiming our posts promoted 'violence and incitement.’"

MRC Free Speech America’s research relied on its CensorTrack database for this study. The database describes why people were censored for blasting Biden. CensorTrack is an MRC database designed to show the proof of the extent of Big Tech censorship of conservatives. The database team has logged over 3,600 overall cases of censorship on multiple Big Tech platforms concerning a myriad of issues such as elections, COVID-19, climate change and race. Each CensorTrack entry includes a written report backed up by internal records and documentation proving censorship.

Burying the Evidence: How Big Tech Wiped Out the Hunter Biden Laptop Scandal

The most important area of Biden censorship showed how Big Tech companies were willing to quash breaking news stories about his son’s alleged scandals.

The New York Post released a story on Oct. 14, 2020, that cited emails from Hunter’s laptop reportedly documenting his family's corrupt dealings in Ukraine, two and a half weeks before Election Day. Platforms like Facebook and Twitter went berserk and to great lengths to silence the Post, censor any account that dared share the newspaper’s reporting and discard the story entirely.

A 2020 MRC poll found that 45 percent of Biden’s voters weren’t fully aware of the Post story precisely because the media and Big Tech tried to whitewash it. “Full awareness” would have led 9.4 percent of Biden voters to abandon him, flipping all six of the swing states he won to Trump.

The New York Times finally authenticated the emails over a year later after Big Tech tried to bury the story. The Times even tied the documents to an ongoing federal investigation. But Big Tech was on the front lines ensuring that nothing prevented Biden from punching his ticket to the Oval Office.

Twitter was the most aggressive censor when it came to the Biden laptop story. CensorTrack entries show that users could not tweet the story or pictures of the Post story.

The worst case of censorship in the Biden laptop subcategory involved one of the most powerful committees in Congress. The GOP House Judiciary Committee tweeted the following: "Twitter has blocked users from tweeting the link to the @nypost's story on Hunter Biden. So we put it on our website for you to read and share." The GOP House Judiciary linked to a press release on its website that contained a republished version initially published in the New York Post. The press release also linked to the original story. When users attempted to click the link to the official press release, they instead received a warning titled: "Warning, this link may be unsafe."

The categories listed for Twitter’s warning included "malicious links that could steal personal information or harm electronic devices," "spammy links," "violent or misleading content that could lead to real-world harm," or other content that would violate Twitter's rules if posted directly on Twitter.

After releasing its story on Hunter, the 220-year-old New York Post was locked out of its account for 17 days. Twitter reportedly said it suppressed the account because of a lack of knowledge of where the article originated, and because it violates Twitter's rules against ‘distribution of hacked material,’ according to former Post reporter Noah Manskar. Then Twitter-CEO Jack Dorsey even claimed after the November 3, 2020 election that blocking the Post story was a “mistake,” even though the damage was already done.

Conservative Hollywood icons weren’t exempt from Twitter’s pro-Biden zealotry. Actor James Woods also had his account locked for tweeting about the New York Post bombshell. The tweet that got his account censored said: "Sorry you have to read it this way. Twitter is censoring any facts that expose the Biden corruption scams." It is unclear whether he linked to the New York Post story or included any photos from the story but Twitter claimed that this tweet violated its “rules against distribution of hacked material" according to screenshots.

Reporters and news outlets also were in the censorship crosshairs for Big Tech for pushing the Biden laptop story in some manner. Human Events Daily host Jack Posobiec, while he was working for One America News, took to Parler to report that Twitter had locked his account on Oct. 14, 2020, for posting a Hunter Biden meme.

The meme used four images of Biden to represent four major websites: LinkedIn, Facebook, Instagram, and Craigslist. Each image of him is slightly different, with the Craigslist image being one of him lying in a bed with a crack pipe in his mouth. Posobiec didn’t say the excuse Twitter used for blocking the meme.

The National Pulse saw a Facebook post of one of its articles on Hunter’s leaked emails showing his friends mocking "f*ggots" and "d*kes" deleted on June 16, 2021. "Facebook is now restricting access to our *EXPLETIVE CENSORED* story on Hunter Biden and his buddies’ frequent use of the terms below," tweeted National Pulse Editor-in-Chief Raheem Kassam, referring to the use of the aforementioned slurs. "All roads lead to Zuck. And he knows we know.”

Big Tech companies have mashed the shut-up button on users who attempt to critique President Biden’s notorious reputation for inappropriate conduct when it comes to women and children. MRC CensorTrack tallied a whopping 232 examples of Big Tech silencing content that attempted to call out Biden for his creepy demeanor around women and children.

Biden once boasted that kids liked touching his “hairy legs” in the pool. Another example of his behavior is when he told a 10-year-old girl in 2019, “I’ll bet you’re as bright as you are good-looking” before placing his hands on her shoulders while talking. The liberal Insider even ran a May 2020 story headlined, “Here are all the times Joe Biden has been accused of acting inappropriately toward women and girls.” Big Tech clearly hates it when users mention Biden’s inappropriate behavior. This subcategory alone composed over one-third of the total instances that Big Tech stifled criticism of the president.

The pro-Biden TikTok had a conniption over the MRC’s video division, MRCTV. MRCTV posted a TikTok short video showing an image of President Joe Biden and the audio from another video saying "I can't eat this but how exciting is it to smell it." A second frame showed four pictures of Biden appearing to sniff several uncomfortable young women. TikTok removed the video for an unexplained "Community Guidelines" violation, but later restored the video after MRCTV appealed.

In one Jan. 12, 2021, incident, a Twitter user said that the platform locked her account after she posted a video compilation of Joe Biden touching young girls. Twitter forced her to delete the video in order to regain access to her account. Twitter censored another user on Feb. 19, 2021, for tweeting pictures of Biden touching young girls. The platform forced the user to delete the image to regain access to the account. Twitter claimed in both cases that the video and images violated its child sexual exploitation policy, according to screenshots.

Screenshots indicated that Twitter censored a user Aug. 10, 2021 for posting a picture collage showing Biden inappropriately touching young girls (with faces obscured) and a woman. The text over the collage said "Politically inconvenient not sexual exploitation. Stop pretending this is normal." Twitter locked the user's account until he deleted the image. The screenshot also showed that Twitter claimed the image violated its "Child Sexual Exploitation Policy.”