Facebook CEO Mark Zuckerberg told CBS This Morning host Gayle King that his platform has removed over 18 million pieces of so-called “misinformation,” but King appeared to want more. She pressed Zuckerberg to reveal how many people view the content before it is taken down. 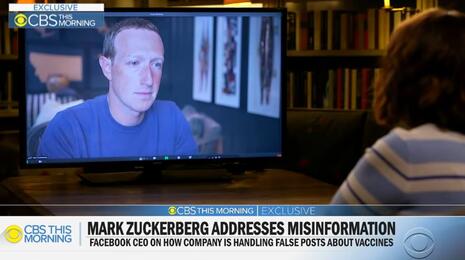 Zuckerberg bragged to King about how much content his platform has removed: “We've taken down more than 18 million pieces of misinformation.” King praised the enormous number as “good” and said she thinks “everybody agrees that Facebook has done a lot to combat misinformation.” But she wanted to know how many people have “acted upon” the information viewed and shared. King then said that Facebook announced it has actually removed 20 million pieces of so-called “misinformation” after she conducted the interview.

The CBS host also asked Zuckerberg, “How many people have viewed the misinformation? Is it more than 18 million? Is it less than 18 million?” She mentioned that President Joe Biden said social media platforms like Facebook are “killing people.” She later continued: “[T]he point he was making, I believe, is that people look at it and they act upon it or they don't act upon it, and Facebook is being blamed for that.”

Zuckerberg argued for a slightly more nuanced view of misinformation: “[A] lot of the stuff that's actually the hardest for us to, to really address is not what I would call misinformation, but instead another category that I would call hesitancy.” He explained that people have questions about the efficacy and safety of the vaccines. He continued, “That's not misinformation. But it's — it's certainly, um, you know, contributing to an environment where people are asking questions about the safety of vaccines. I don't think we should ban it.”

Zuckerburg claimed that he opposes banning so-called vaccine-hesitant content, but Project Veritas purportedly uncovered that Facebook flags and demotes comments that promote so-called “vaccine hesitancy.” The platform also partnered with the Chinese propaganda-pushing World Health Organization (WHO), to research and promote how online platforms can best challenge and shut down “vaccine hesitancy.”

Alec Schemmel contributed to this story.

Conservatives are under attack. Contact Facebook headquarters at 1-650-308-7300 and demand that Big Tech be held to account to mirror the First Amendment while providing transparency and equal footing for conservatives. If you have been censored, contact us at the Media Research Center contact form, and help us hold Big Tech accountable.