Big Tech companies, outraged at President Donald Trump’s win in 2016, put everything they had into ensuring that he would lose in 2020.

In seven key swing states, one in seven Biden voters (14 percent) said they primarily relied on sites such as Facebook or Twitter for their election news, according to a survey from the Media Research Center conducted by The Polling Company, which polled 1,750 Biden voters in seven swing states. But on Twitter and Facebook, conservatives, Trump supporters, and news that damaged the Biden campaign were regularly stifled, especially in the months leading up to the 2020 election. 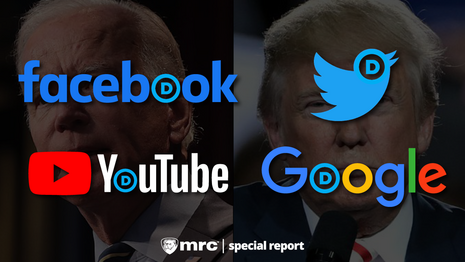 Campaign messages only have value when they are heard. Trump and his campaign suffered the most in the censorship melee. Before the election, Twitter and Facebook had censored them 65 times but left former Vice President and Democratic presidential nominee, Joe Biden, unscathed. Twitter was the bulk of the problem, with 98 percent of all the instances of censorship.

A bombshell New York Post report implicating former Vice President Joe Biden and his son, Hunter Biden, in corrupt dealings in Ukraine was almost immediately suppressed on both Facebook and Twitter. The Post reported on “smoking-gun email[s]” that purportedly revealed “how Hunter Biden introduced Ukrainian businessman” to his father, the then vice president. Polling showed that if all Biden voters had known about this story, enough would have changed their votes to swing the election to Trump. The same story that the Post was banned for is in every publication now, from The New York Times to CNN. After the election, of course.

A similar incident happened when the Post released a story showing Biden’s corrupt dealings with China. In a separate national survey, four percent of all Biden voters, had they known the story, would not have voted for Biden.

But Big Tech denies it censors conservatives every time while finding new ways to suppress, label, and remove information posted on their platforms. The liberal media insist that tech companies are not removing content, but still urge Facebook, Twitter, and Google to do more to remove ideas and opinions that go against their established narrative. From criticism of mail-in ballots to satirical posts about Biden, Big Tech took them all down. YouTube’s latest policy that will ban content that contests the 2020 election results is proof of the overwhelming direction toward censorship.

The liberal media covered up the fact that Big Tech companies censored conservatives. “Republicans and right-wing media outlets have been all too happy running with the narrative that social media companies are censoring conservatives, regardless of the facts,” stated CNN Senior Media Reporter Oliver Darcy. Vox Associate Editor of Politics and Policy Aaron Rupar tweeted in 2018: “.@foxandfriends gave @GOPChairwoman a platform to tout, without any pushback, hoax stories about conservatives being ‘censored’ on Twitter.” Popular Information founder Judd Legum tweeted in 2019: “The core claim, that conservatives are being censored on social media IS TOTALLY MADE UP.” Media ignored Big Tech censorship reports, hearings in the House and Senate, and labeled censorship concerns as a “conspiracy theory.” The strategy was to make it seem as if censorship wasn’t happening.

“I doubt I would be here if it weren’t for social media, to be honest with you,” said Trump to Fox Business host Maria Bartiromo in 2017. Big Tech heard and reacted. Out of the 100 new tech policies introduced in 2020, 26 were touted as election-related. Some of these policies included Twitter’s attempt to disable simple retweeting of content; Facebook’s plan to shut down political ads after the election; and YouTube’s removal of content aimed at content that would potentially reduce voter participation.

“[T]he timing cannot be pure coincidence,” writes Senior Writer Will Oremus at tech magazine OneZero, at Medium. He explained that some of the changes Facebook has made over the past year “position Facebook to better defend itself against a potential president and party that has raised the specter of regulations that could seriously damage its business.”

Ninety percent of donations from Twitter and Facebook employees went to Democratic campaigns, according to OpenSecrets.org. Facebook contributed 91.68 percent ($2,409,464 out of $2,628,040) of its donations to Democrats collectively between individual donations ($2,400,269) and PAC donations ($234,000) equaling $200 or more. Affiliates of Alphabet, Inc., Microsoft, Amazon, Facebook, and Apple donated $10,243,589 to the Biden campaign during the 2020 presidential race, according to OpenSecrets. Trump received only $427,047 from the aforementioned Big Tech companies.

When the left embraced mail-in ballots, so did Big Tech. But that meant a hasty suppression of any criticism of mail-in voting. A letter from the Biden campaign, obtained by Axios, proclaimed that Donald Trump Jr.’s public statements of concern over mail-in voting were dangerous to democracy itself. Biden specifically condemned the platform for allowing “this dangerous claptrap to be spread to millions of people.” The liberal media, including CNN and TechCrunch,  previously had warned about the dangers of mail-in ballots. “Yet votes cast by mail are less likely to be counted, more likely to be compromised and more likely to be contested than those cast in a voting booth, statistics show,” wrote The New York Times in 2012.

Trump was fact-checked by Twitter for condemning “Mail-In Ballots” as “substantially fraudulent” in May 2020. GOP Chairwoman Ronna McDaniel called out Twitter for censoring critiques of mail-in voting earlier this year: “Twitter falsely claims there is no evidence of mail-in ballot fraud.” She added: “That’s odd since NJ’s all-mail primary this month was ‘plagued’ by fraud concerns, with 3,000 votes set aside.” The censorship seemed to come as a response to criticism from the Biden campaign.

Big Tech companies wield an incredible amount of power when it comes to informing and influencing their users. They knew it and abused that power to help steal a presidential election.

Google Responsible Innovation Head Jen Gennai was caught on camera by Project Veritas in 2019 saying, “We’re training our algorithms, like, if 2016 happened again, would we have … would the outcome be different?” Gennai bragged that Google was going to prevent “the next Trump situation.”

Forbes wrote that “72% of U.S. citizens of voting age actively use some form of social media.” More than 172 million potential voters were subject to the subtle changes online. Feeds were manipulated, conservative politicians were censored, and stories were suppressed in order to affect these voters in some way.

Both Facebook and Twitter continued to manipulate what they allowed users to see even after the election. Facebook modified its feed to restrict conservative sites and emphasize traditional news outlets who pride themselves on being against Trump.

It affected voters, according to the MRC survey: One of every six Biden voters surveyed (17%) said they would have abandoned the Democratic candidate had they known the facts about one of eight key stories about either Biden and Trump. The Hunter Biden story was the strongest example out of the eight and 9.4 percent of those surveyed said that would have caused them to change their vote — if they had known about it.

Big Tech proved that they were out to influence the election by continuing to hammer Trump into the ground with censorship even after all was over. Trump and his campaign have been censored at least 486 times on Twitter, with more than 400 of those instances occurring after November 3.

If liberal Big Tech companies have so much power and influence to manipulate an election, can any election really be fair? That’s the question that both political parties, Congress and the federal government must address. Before the next election.