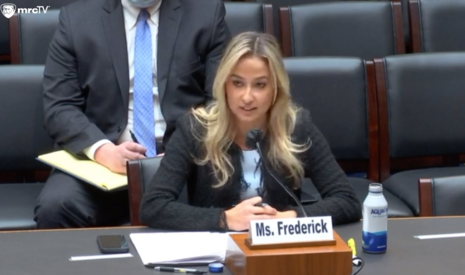 The Heritage Foundation technology policy research fellow Kara Frederick in congressional hearing testimony cited Media Research Center ground-breaking analysis on the political impacts of Big Tech’s censorship, including how Big Tech stole the 2020 election. “You have the Media Research Center, which is acting as a lion in this regard,” Frederick said, explaining how tech companies dishonestly pretend they are not biased.

Frederick testified at a hearing on Big Tech “reforms” of the House Energy and Commerce Communications and Technology Subcommittee on Dec. 1. Frederick explained how she worked for Facebook like leftist activist “whistleblower” Frances Haugen.

Frederick’s viewpoint on Big Tech was very different from censorship-supporting Haugen’s, however. Frederick said she joined Facebook because she believed in “the democratization of information,” but now Big Tech just engages in “viewpoint censorship.” Frederick cited original MRC research and polling to prove her point.

Frederick cited original MRC research. “The confluence of evidence is irrefutable. Twitter and Facebook censor Republican members of Congress at a rate of fifty-three to one, compared to Democrats. Twitter suspends conservatives twenty-one times more often than liberals,” Frederick stated. “These practices have distinct political effects.”

Frederick then cited MRC’s explosive polling on the 2020 election. “The Media Research Center found in 2020 that one in six Biden voters claimed they would have modified their vote had they been aware of information that was actively suppressed by tech companies. Fifty-two percent of Americans believe social media suppression of the Hunter Biden laptop story constituted election interference.

“These practices erode our culture of free speech, chill open discourse, and engender self-censorship, all while the Taliban, the Chinese Communist Party and Iranian officials spew their bile and genocidal rhetoric on American-owned platforms,” Frederick said.

She also said the government is coordinating with Big Tech for targeted censorship. Frederick warned that the definition of misinformation can be “in the eye of the beholder,” meaning that the “misinformation” of today may well turn out to be the truth. Frederick pointed to Big Tech’s suppression of the Wuhan lab leak theory, which is now considered credible.

Frederick said that constitutional, God-given rights must be protected in any reforms of Big Tech. “[H]olding Big Tech accountable should result in less censorship, not more. In fact, the First Amendment should be the standard from which all Section 230 reforms flow,” Frederick stated. “We cannot let tech totalitarians shape a digital world where one set of thinkers are second-class citizens.”