Climate experts Steven Milloy and Marc Morano bashed Google/YouTube for reportedly vowing to prohibit ads on videos questioning climate change. “This is Big Tech Collusion with the government,” Morano stated. “Google’s demonetization is an admission that we are winning, a treasure far more valuable than Google ad revenue,” Milloy said. 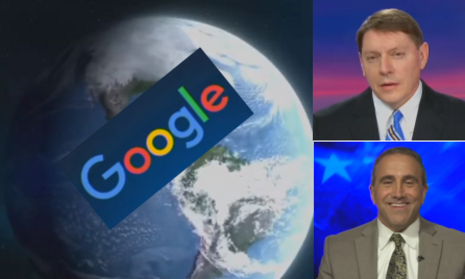 Climate Depot publisher Morano said, “Google is simply doing the bidding of the federal government and global groups like WHO and the UN. Google is implementing a policy that says you officially cannot disagree with the claims of your government or quasi-government organizations. This is Big Tech collusion with the government.”

Morano compared the Google/YouTube climate video ban to recent COVID-19 restrictions: “They have labeled as ‘misinformation’ any COVID claims that were not in line with WHO, and now they will do the same with any climate claims that are not in line with the UN climate panel.” Morano said, “For decades the progressive movement has tried to impose and sought a one-party state in America. Climate activists [like] Tom Friedman on the pages of The New York Times extolled the virtues of China’s one-party system.”

He continued: “When COVID came along, they were able to achieve their long-sought vision of no dissent under essentially a one-party state in the once free West. John Stossel has already faced the wrath of the climate censors of Big Tech.” Morano warned, “Big Tech has shut down COVID lockdown dissent [and] vaccine mandate dissent, and now they have their sights set on climate ‘denial.’” Morano also indicated he fears his video series, the Morano Minute, will soon be banned.

Milloy, founder of JunkScience.com, told MRC Free Speech America, “Demonetization of websites that expose the climate hoax does nothing but validate what climate realists have been saying for years: It’s not about the climate; it’s about the political power. If what we were saying was wrong, we would have been laughed off the Internet long ago. Instead, reality is validating us and public support for climate idiocy is going nowhere.”

Milloy even added that “Google’s move will have no effect on climate realist web sites for the simple reason that the ad revenue is pretty trivial.” “We do it because we oppose the abuse of science, especially as it is being used to advance totalitarianism.”

Google and YouTube will no longer allow ads or creator payments which allegedly contradict “‘well-established scientific consensus around the existence and causes of climate change,’ the company’s ads team said in a statement,” reported Axios. Google promised to consider “context” and said it consulted “experts,” including from the United Nations, Axios wrote. Axios called the move “one of the most aggressive measures any major tech platform has taken” regarding climate change.

Google and YouTube are increasing censorship through demonetization. YouTube has also reportedly demonetized fishing and hunting videos. Grabien, “which provides a suite of tools for newsmakers and curates its own original news content,” had its channel on YouTube demonetized in August. Google also demonetized a Daily Mail column from Piers Morgan criticizing gymnast Simone Biles for abandoning her fellow U.S. gymnasts at the Tokyo Olympics in August.