Conservative leaders from Senator Ron Johnson (R-WI) to Congressman Greg Steube (R-FL) addressed the most dire priorities about online censorship facing the conservative movement. Sen. Johnson declared that Big Tech is not only not a marginal issue, it is hindering the American republic’s very ability to function: the censorship now “affects elections.” He then referred to scandals involving President Biden’s son Hunter Biden and how they were hidden from the American public during the election by Big Tech: “Surveys have shown if Americans would have known about that, we wouldn't be experiencing the disaster that is called the Biden administration.”

Media Research Center founder and President Brent Bozell then advised those wondering about the survey to check out the MRC’s own research: “[We can send you] the actual survey that we took after the election, that proves conclusively” that “had the social media platforms allowed that information into the public square, Joe Biden would not have been elected president of the United States of America, and we’ve proved it.”

Steube called out social media companies for absurdly lopsided censorship: “We have a former president of the United States who is banned on social media platforms while the Taliban, the Iranians and other terrorist harboring organizations can use those platforms freely.”

American Principles Project Director of Policy Jon Schweppe remarked on how his organization has been targeted multiple times by Big Tech censorship and implored conservatives to agree to a definitive answer as soon as possible: “It’s going to happen to everybody on this call. It's going to happen to every member of congress. If these guys are continued to allow-- you know, if we continue to allow them to just do this and interfere in elections with no consequence, there’s not going to be any end in sight.” 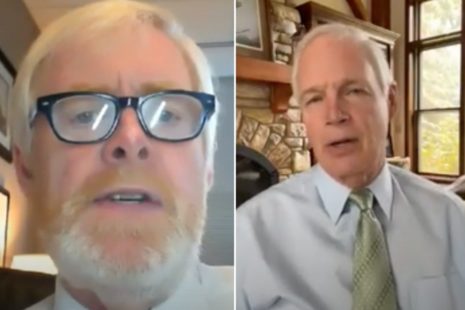 The New York Post exposed Hunter Biden for reportedly having “pursued lucrative deals involving China’s largest private energy company — including one that he said would be “interesting for me and my family.” Twitter reportedly took similar action to the last New York Post bombshell. Breitbart observed that “Twitter has censored the distribution of a second New York Post story containing bombshell information about 2020 Democrat presidential nominee Joe Biden’s son Hunter Biden — the latest piece reporting on how Hunter Biden’s emails reveal that he tried to cash in big on behalf of his family with a Chinese energy company.”

Electoral democracy operates on the assumption that the public makes an informed decision on which candidate to support, but Big Tech meddling kept voters in the dark.

NewsBusters recounted McLaughlin & Associates’ polling question on Biden’s China scandal, which indicated that 36 percent of Biden voters were NOT aware of the evidence linking Joe Biden to corrupt financial dealings with China through his son Hunter. Thirteen percent of these voters (or 4.6% of Biden’s total vote) say that had they known these facts, they would not have voted for the former vice president.