Liberals jumped the gun on COVID censorship, and former President Donald Trump let them know it in his appearance on The Clay Travis and Buck Sexton Show. Trump wasn’t shy about taking a victory lap responding to liberals who initially scorned his theory that COVID-19 emerged from a lab in Wuhan: “Now, they're all saying that I was right."

The difference between a conspiracy theory that must be censored and an acceptable possibility only appears to be a few months of time. “Former President Donald Trump said Tuesday critics ‘went crazy’ last year when he said the coronavirus could have escaped from a Chinese lab and he was ‘more confident’ than before that's how the pandemic emerged,” reported Fox News 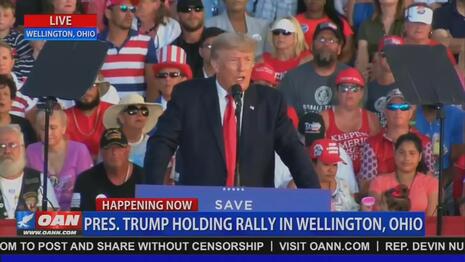 Fox News continued: “The hypothesis was widely called a ‘debunked’ or ‘fringe" conspiracy theory by media outlets last year. Google and Facebook suppressed sharing of and searching for the theory that it emerged from the lab, which conducts bat coronavirus research and had widely known security issues.”

Now that the so-called experts appear increasingly wrong and as the lab leak theory gains credibility, Big Tech censors have egg on their faces.

Host Clay Travis directly observed how the narrative quickly shifted: "All of the sudden, everybody is circling back and saying, ‘Oh, maybe this did happen,’ but all of these different tech platforms disallowed the conversation and debate to actually take place.” Trump blasted liberals for suggesting alternative “phony” explanations such as that COVID-19 “came from a bat colony, a thousand miles away. Much of that has really been disproven.”

The radio show also discussed Trump’s response to Big Tech censorship in general and whether he would start his own platform:

Trump condemned censorship “by Amazon and by Google and by Apple.” He then recounted “what happened to Parler and others, they get shut down as soon as somebody puts something that’s somewhat controversial.” Trump then declared: “No. You have to have your own cloud or you have to have your own means of getting it out, because as soon as you get big or powerful or you start saying anything that's somewhat conservative, they will censor you.”

Big Tech was ruthless when crushing rumors of the Wuhan Lab narrative last year. Twitter allegedly cracked down on news outlet ZeroHedge after it shared the lab narrative in February 2020.

Forbes claimed that a spokesperson from Twitter indicated that “ZeroHedge was removed for violating its platform manipulation policy, which the social media giant describes as ‘using Twitter to engage in bulk, aggressive or deceptive activity that misleads others and/or disrupts their experience.’” However, the Daily Mail cited a resurfaced research paper from South China University of Technology that appeared to lend some credence to ZeroHedge’s initial reporting.