Facebook celebrates that it is “one of the best places to work for LGBTQ equality.” The company’s LGBTQ employment has jumped to eight percent in 2018, far higher than the 2017 Gallup Poll estimate that claims only 4.5 percent of the national population is LGBT.

This won’t surprise social conservatives, who have complained heavily about mistreatment on the platform — especially on moral issues like marriage. Evangelist Franklin Graham was temporarily banned by Facebook for a post he made two years earlier criticizing the North Carolina transgender bathroom policy. Facebook also came under fire for censoring videos by PragerU, Facebook has also used left-wing hate groups like the SPLC as advisors to determine what is or isn’t considered hate speech. 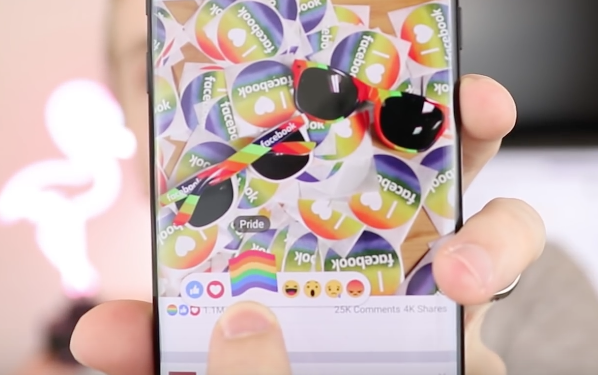 Democrats like Rep. Tulsi Gabbard (HI) have also balked at the far-left increasingly designating mainstream religious organizations like the Knights of Columbus as “hate groups.”

Facebook’s LGBT employee increase represented a 14.29 percent jump in just one year. The company touted the increase in “US employees who self-identify as LGBQA+ or Trans+ for the third year in a row.”

Even then, liberal critics want more. A transgender engineer left Facebook in mid-January, complaining of frustration with a lack of “diversity and inclusion.”

The company’s annual Diversity Report, released in July, noted “HRC has again recognized us as one of the best places to work for LGBTQ equality with a 100% rating on their Corporate Equality Index.”

Facebook is almost twice the national average of four and a half percent LGBT population according to Gallup polling, but that does not satisfy some leftists. Facebook’s newsroom claims they had “33,606 employees as of September 30, 2018” and that would equate to approximately 2,688 LGBT employees at the time, meanwhile only 100+ employees are reported to have joined the internal “FB’ers for Political Diversity” group.

Transgender activist Sophie Alpert quit the company after lamenting on Facebook’s internal communications that coworkers had harassed her for advocating diversity concerns.

Alpert said, "I want to spend my time at a place willing to push further on diversity and inclusion. One where it's not OK to write on Workplace that white privilege doesn't exist. One where if I call out that our board has too many white men, I don't get harassed by other employees on Blind with transphobic messages saying I should be fired."

Facebook spokesman Anthony Harrison commented that the company does not tolerate harassment, and that Alpert was provided with plenty of accomodation and attention by human resources staff.

Conservatives have complained their interests are underrepresented in big tech.Christian scholars like Robert Gagnon commented, “The greatest threat to our free speech and free exercise of religion comes from zealous advocates of the 'LGBTQ' agenda who appear to rule FB, Google, and Amazon.”

Facebook has had problems with its staff mistreating what few conservative workers do work among them. A conservative engineer left the company after being harrassed for his political views. Facebook’s chief tech officer wrote a memo providing new guidelines: "Don't insult, bully, or antagonize others," the memo said. "Don't try to change someone's politics or religion. Don't break our rules about harassing speech and expression."

This occured after Brian Amerige wrote a memo in August 2018, on Facebook’s “political monoculture that’s intolerant of different views” and mob mentality. He specifically called out the hypocrisy of people who “claim to welcome all perspectives, but are quick to attack — often in mobs — anyone who presents a view that appears to be in opposition to left-leaning ideology.”