For the second straight news cycle, ABC News failed to mention any of Hillary Clinton’s scandals on Friday night as she’s expected to announce her second presidential campaign on Sunday as World News Tonight instead gushed over a new epilogue to her latest book and Chelsea Clinton’s appearance on the May issue of Elle magazine.

Anchor David Muir led off the program’s 55 seconds of coveragne by touting an excerpt from the epilogue of the upcoming paperback version of Clinton’s book Hard Choices: “Tonight, Mrs. Clinton revealing a new epilogue to her book, talking about becoming a grandmother, saying, quote: ‘Rather than make me want to slow down, it has spurred me to speed up.’”

Turning to ABC News chief White House correspondent Jonathan Karl, Muir wondered whether “this [is] a hint to perhaps part of her campaign message” to which Karl promoted Clinton’s presumed campaign message and Chelsea Clinton being selected for the cover of Elle:

You’ll be hearing a lot about granddaughter Charlotte and about Hillary as a grandmother and as a woman and take a look at this, David. Chelsea Clinton is on the cover of the new Elle magazine, talking about the importance of electing a female president. That is a theme you’re going to hear over and over again.

Muir replied that it seemed to be “good timing all around for them on this one” and then closed out the segment by asking Karl what the early part of Clinton’s 2016 campaign will “look like.”

NBC Nightly News also touted the new epilogue with NBC News White House correspondent Kristen Welker quoting an excerpt about how she noticed her husband and former President Bill Clinton had shed a tear when their granddaughter was born.

Along with Welker, Meet the Press moderator Chuck Todd also noted the e-mail scandal to interim anchor Lester Holt as a possible pitfall for Clinton with Todd ruling that the issue is about “being honest and trustworthy” as well as the fact that: “[W]e’ve actually seen a whole bunch of polling this week that shows the e-mail controversy has actually hurt Hillary Clinton on that specific issue.”

Over on the CBS Evening News, anchor Scott Pelley discussed the impending announcement with Face the Nation host Bob Schieffer where both the e-mail scandal and numerous Clinton scandals from the 1990s were mentioned.

After Schieffer explained how Clinton must “make this about the future” and avoid having the campaign “become something about the past,” Pelley asked the retiring anchor if the e-mail scandal is “going to hurt her.” Schieffer responded by declaring that he thinks “it does have the potential to do just that” since:

[I]t really kind of opens the door to cause people to start thinking about and looking back, and once you start down that trail and start talking about, you know, the Whitewater and the Rose law firm, and what did they get improper business while Bill Clinton was president, and then one scandal after another, I think if it gets – if this campaign becomes about what used to be, I think she’s going to have a problem, especially in the general election.

However, one development all three networks failed to cover Firday is news that the State Department’s Inspector General is investigating the program that allowed Clinton confidante Huma Abedin to work alongside Clinton while she served as Secretary of State.

The transcript of the segment from ABC’s World News Tonight with David Muir on April 10 can be found below. 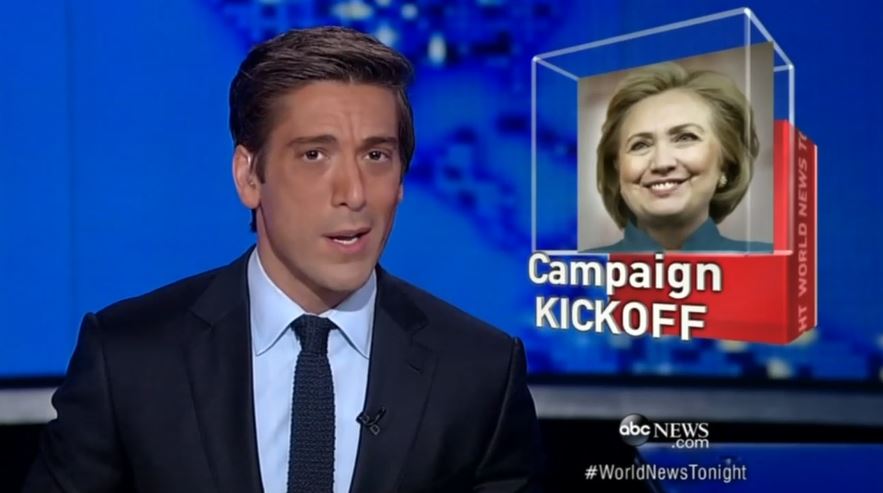 DAVID MUIR: And now to 2016 and the race for the White House. Hillary Clinton expected to make it official Sunday, announcing she's running. Tonight, Mrs. Clinton revealing a new epilogue to her book, talking about becoming a grandmother, saying, quote: “Rather than make me want to slow down, it has spurred me to speed up.” Let’s get right to our chief White House correspondent Jonathan Karl because we were all wondering today is this a hint to perhaps part of her campaign message?

JONATHAN KARL: Yes, it sure is.

[ON-SCREEN HEADLINE: Your Choice Your Vote; Clinton to Announce Campaign]

You’ll be hearing a lot about granddaughter Charlotte and about Hillary as a grandmother and as a woman and take a look at this, David. Chelsea Clinton is on the cover of the new Elle magazine, talking about the importance of electing a female president. That is a theme you’re going to hear over and over again.

MUIR: So good timing all around for them on this one. Just a few moments left, the first phase of the campaign, what’s it going to look like?

KARL: I'm told the campaign video announcing is already shot, and will be released on Sunday and she will travel soon, but to small events to start things off.

MUIR: Alright, here we go, Jon. Thanks, great to have you in New York.