CBS’s Charlie Rose on Clinton Email Scandal: ‘Why Is This Story Getting So Much Attention?’

On Tuesday night, the “big three” of ABC, CBS, and NBC continued to report on the latest scandal involving possible 2016 Democratic presidential candidate Hillary Clinton over her exclusive use of a private email account while she was Secretary of State in what may have been a violation of federal law.

During the coverage of the matter on the CBS Evening News, substitute anchor Charlie Rose flashed his favoritism for his dear “friend” Hillary Clinton by wondering to CBS News political director John Dickerson: “Why is this story getting so much attention?”

Responding to the question, Dickerson pointed to Republicans “showing her the attention they think she deserves,” but admitted that “[t]here are a lot of legitimate questions about whether Clinton's use of this private email account went beyond the previous practices of other secretaries of state, and it also raises the question when she turned over the emails.”

In teasing the story at the start of the show, Rose invoked the movie Saving Private Ryan by dubbing this scandal: “The new Hillary Clinton drama – saving private emails.”

CBS News State Department correspondent Margaret Brennan reported on the story that The New York Times broke Monday night and, at one point, asked Republican Congressman Darrell Issa (Calif.) if what’s been unearthed is “a failure or is it an oversight.”

There are questions swirling tonight around Hillary Clinton as she ramps up a potential run for president and they concern a personal e-mail account she used while serving as Secretary of State, and whether conducting public business on a private account may have broken the rules.

Correspondent Kristen Welker summarized many of the points made in The Times article, but added that “Republicans seized the opportunity to attack Clinton” before playing a soundbite of Republican Congressman Trey Gowdy’s reaction and quoting a tweet from Jeb Bush that “[t]ransparency matters.”

ABC’s World News Tonight featured a segment from chief White House correspondent Jonathan Karl, who questioned White House Press Secretary Josh Earnest about the scandal on Tuesday and had Earnest state that he had “not encountered” anyone who only uses personal email in the administration.

Further, Karl’s fair and tough report unearthed a clip from 2011 of then-White House Press Secretary Jay Carney saying this about using government email (while Hillary was still Secretary of State): “We are definitely instructed that we need to conduct all of our work on our government accounts.”

With that as a backdrop, Karl pointed out that “Mrs. Clinton didn’t even both to get a government email account.” He concluded his story later by citing previous Secretaries of State Colin Powell and Condoleezza Rice as having used “official government-issued email accounts” to conduct business with Powell “sometimes” used a private account.

Also joining the major English-language networks in covering this story on Tuesday night were the top two Spanish-language networks. As ABC, CBS, and NBC did, Univision ran a full segment on the latest Clinton scandal. Appearing on its evening newscast, Noticiero Univision, the story ran for three minutes and two seconds and included mention of Bush's tweet (as NBC did).

Over on Telemundo, the story was far different. While Tuesday's Noticiero Telemundo covered the story, it only lasted for 35 seconds.

The relevant portions of the transcript from the CBS Evening News on March 3 are transcribed below. 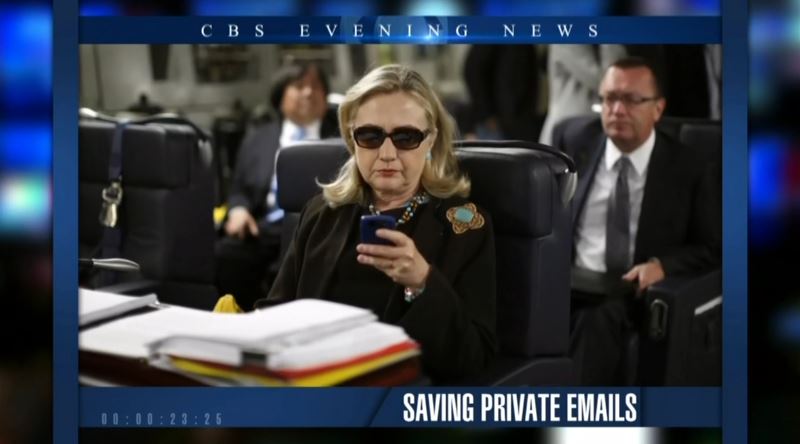 ROSE: Hillary Clinton is under fire tonight after it was revealed she used a personal email account rather than a government account to conduct business as Secretary of State. Here's Margaret Brennan.

MARGARET BRENNAN: When Hillary Clinton traveled more than a million miles, she famously carried her blackberry with her. State Department Spokeswoman Marie Harf said today that Clinton's use of a personal email account was not illegal. 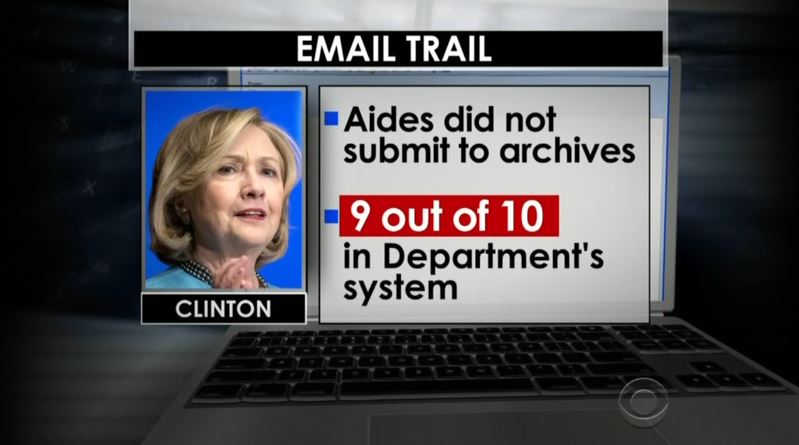 BRENNAN: But Clinton aides did not submit those emails to government archives as required by 2009 law. They claim nine out of 10 emails she sent were to State Department colleagues and, therefore, in the Department's computer system. Spokesman Nick Merrill said there was, “every expectation they would be retained.” Last year, the State Department sent a written request for the emails. Clinton's aides then turned over 55,000 pages of communications. The emails were revealed after the Department sent 300 Clinton messages to a House committee investigating the Benghazi attacks.

BRENNAN [TO ISSA]: Secretary Clinton's aides didn't hand over her emails to government records. Is that a failure or is it an oversight?

ROSE: All of this comes as Clinton is widely expected to make a run for the White House, which is why we turn now to our CBS News political director John Dickerson. John, why is this story getting so much attention? 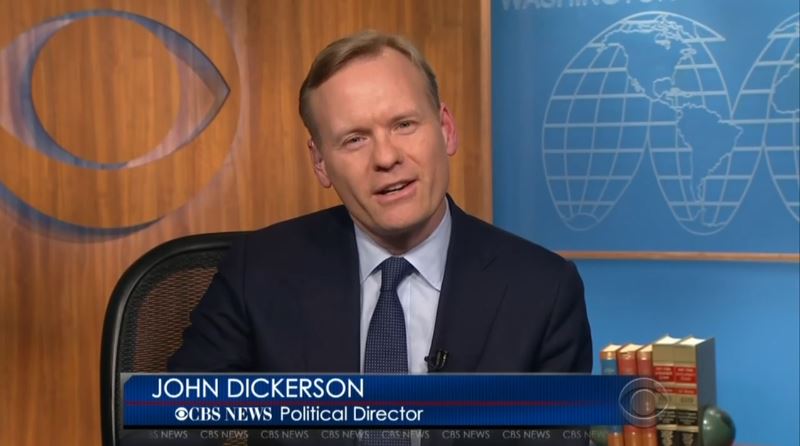 JOHN DICKERSON: Well, Republicans think she's going to be the Democratic nominee, and so they're showing her the attention they think she deserves. There are a lot of legitimate questions about whether Clinton's use of this private email account went beyond the previous practices of other secretaries of state, and it also raises the question when she turned over the emails. Did she turn over everything? A Clinton spokesperson says yes, but congressional investigators looking into those Benghazi attacks are skeptical. So, a protracted tug-of-war over these emails could reanimate concerns that the Clintons are secretive, which puts pressure on Hillary Clinton when she does announce, to have a campaign message that can withstand frequent interruptions.