News concerning the mass kidnapping of Christians by ISIS in Syria worsened on Thursday with reports from multiple human rights groups that raised the initial number of those taken from 150 to now at least 220. If you watched the network evening newscasts, though, you would not have known that if you had tuned into CBS or NBC.

This latest case of network bias by omission comes as NBC has yet to cover this story on either Today or NBC Nightly News while CBS had covered it on the February 24 editions of CBS This Morning and the CBS Evening News with Scott Pelley.

According to an article from CNN.com [emphasis mine]:

ISIS has seized even more Assyrian Christian hostages after taking over nearly a dozen Assyrian villages in northeastern Syria in the past few days, an activist said Thursday.

The number has climbed steadily, from an initial estimate of between 70 and 100 people seized on Monday to 150 as of Wednesday, with women, children and the elderly among them.

The London-based Syrian Observatory for Human Rights put the number of Assyrian hostages seized over three days at 220, in a statement released Thursday.

They were taken from 11 villages in the Tal Tamer area in al-Hasakah Province, the monitoring group said. Its information indicates that ISIS has taken them to the Mount Abdelaziz area, southwest of Tal Tamer.

Meanwhile, ABC’s World News Tonight did provide an update on one of ISIS’s more recent atrocities with the following 25-second brief from anchor David Muir:

We also reported here on those early morning raids this week by ISIS, taking Christians hostage. Tonight, a human rights organization out of the UK now saying that number has risen to more than 220 Christians, kidnapped from 11 villages in Syria over the course of three days.

As for what CBS and NBC covered instead of this horrible story, look no further than my previous blog, which highlighted how the three networks combined to spend five minutes and 58 seconds on news that two llamas were on the loose in Arizona after breaking loose from an appearance at a senior center.

The transcript of the brief that aired on ABC’s World News Tonight with David Muir on February 26 can be found below. 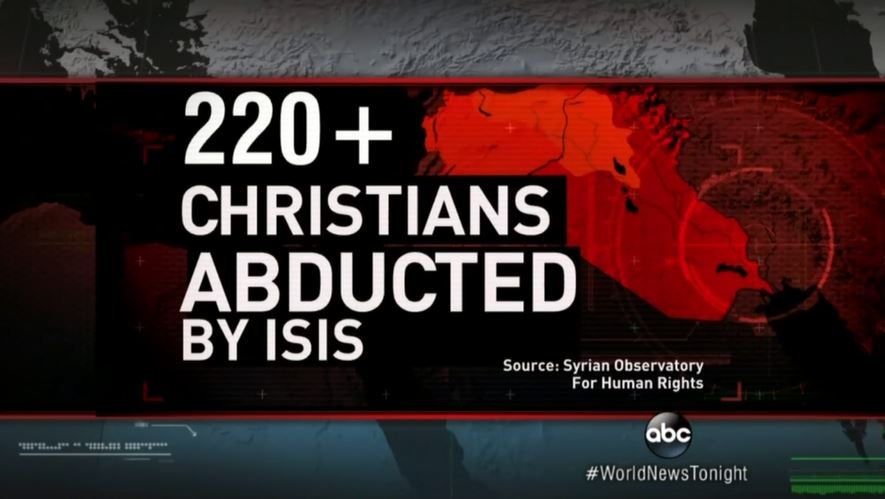 DAVID MUIR: We also reported here on those early morning raids this week by ISIS, taking Christians hostage. Tonight, a human rights organization out of the UK now saying that number has risen to more than 220 Christians, kidnapped from 11 villages in Syria over the course of three days.