The Catholicism of Joe Biden, Nancy Pelosi, and others in the Democratic party have come under question as their support of abortion contradicts their faith’s doctrine. Texas Bishop emeritus Michael Pfeifer is calling on his fellow bishops and laymen to take Biden to task, and take a stand for life for the faith, as Catholic News Agency reported July 16.

After the overturning of Roe v. Wade, Democrats have been in complete meltdown and damage control mode, desperately trying to save their sacred right to kill a baby. Biden and Pelosi in particular have come under fire for their support of abortion despite Catholicism’s clear stance on it. The Church, as well, has been confused regarding its position on them receiving Communion, Pelosi being denied Communion in her home parish but then puzzlingly receiving it at a papal mass. 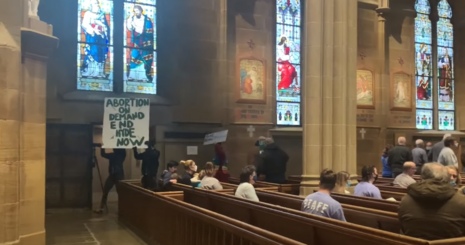 Bishop Pfeifer wrote in a pastoral statement, “Our own president is considering declaring abortion a public health emergency…The speaker of the house is trying to enshrine abortion on demand in federal law.”

He called on bishops and laity to, “send an unmistakable message to these pro-abortion leaders that we will never let these horrible death plans be enacted.” No ambiguity there. Pfeifer has made it clear that Catholicism is anti-abortion and that there’s no room for pro-choice politics in the Church.

“As shepherds of our people in the U.S.A., we are deeply disturbed that our president has chosen to use his power as the nation’s chief executive to promote and facilitate and even codify abortion in our country.”

He told CNA that he is, “encouraging all my brother bishops to speak out more clearly and strongly to give guidance to our people … encouraging them to pray more frequently and to become more actively involved in addressing the abortion issue, especially in states that approve abortion.”

Catholics are obliged to not sit on the sidelines on abortion and certainly not actively facilitate and encourage abortion like Biden and Pelosi have done. They need to repent, and Catholics need to keep up the pressure for their sake and the sake of millions of unborn.