Podcaster Joe Rogan and comedian Dave Chappelle called out the Saturday Night Live cast for their treatment of host Elon Musk leading up to the show, both agreeing that “No one can be woke enough."

Billionaire Elon Musk guest-hosted another typically-lame Saturday Night Live episode after weeks of controversy. Cast members voiced their displeasure over Musk’s appointment as host due to his billionaire status and his openly-held skepticism of COVID-19 early on. Andrew Dismukes, Bowen Yang and Aidy Bryant tweeted negatively about Musk, prompting SNL to decide no cast members would be compelled to appear alongside him if they did not wish to. In anti-climactic fashion, the show went on with no apparent changes and was as mediocre and unfunny as ever.

Rogan and Chappelle discussed the backlash surrounding the Musk selection during the “The Joe Rogan Experience” podcast. Chappelle, who has also been a SNL guest-host in the past, thought it “puzzling” that there would be retaliation against Musk. He told Rogan, “You’re not gonna nag people into behaving in a way that’s – in fact, if you continue with this tone, even if you’re right, you’ll be very hard to hear.”

Chappelle has decried cancel culture in the past and in this instance was warning that fierce political correctness can backfire, ultimately detracting from the actual social justice effort. Rogan followed by saying, “They want someone to be 100% compliant to whatever ideology they're a part of. And any deviation of that is problematic."

Even amidst an onslaught of ill will, the tech mogul’s performance garnered a ratings lift for the show as the third most-watched episode this season. Nevertheless, online responses from woke blue checks and other left news outlets were nothing other than negative. Blue check Daisy Barringer, a “freelance writer/editor” according to her Twitter bio, tweeted that she hopes Musk perishes in a flaming Tesla, after he flashed the “OK” during one of the skits. Many on the left interpret this hand gesture as signifying “white power.” After the outrageous claim and the backlash it drew, Barringer changed her Twitter settings to private. Luckily the internet has retained proof of the tweet through use of screenshots. 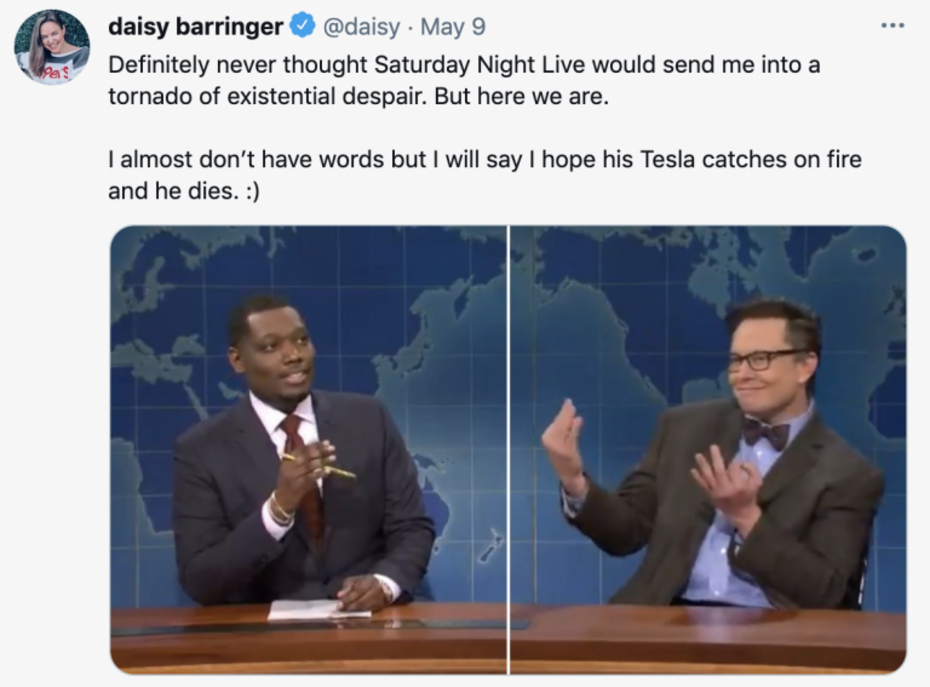 CNN published an opinion piece that claimed Musk appearing on SNL was a transactional agreement, one that Musk would use to come across as more likeable and an opportunity for SNL to both up their ratings while also helping him “whitewash his horribly irresponsible comments downplaying the risks of Covid-19 and his insensitive remarks about the transgender community.” According to Obeidallah, “Musk’s big mistake” was neglecting the opportunities afforded to him in the show to apologize for his past offenses. He also said that the Tesla CEO “didn’t deserve the honor” of hosting the show.

The Daily Beast trashed Musk’s performance in a piece entitled “Elon Musk’s Deceptive and Deeply Awkward SNL Monologue.” The article characterized him as being a “union-busting billionaire who’s repeatedly spread COVID and vaccine misinformation.” Additional critiques of his monologue delivery were included, “He stumbled nervously — albeit somewhat endearingly — through the rest of his scripted speech.” It is highly insensitive of The Daily Beast to mock an individual with Asperger's. Maybe they will be canceled next.