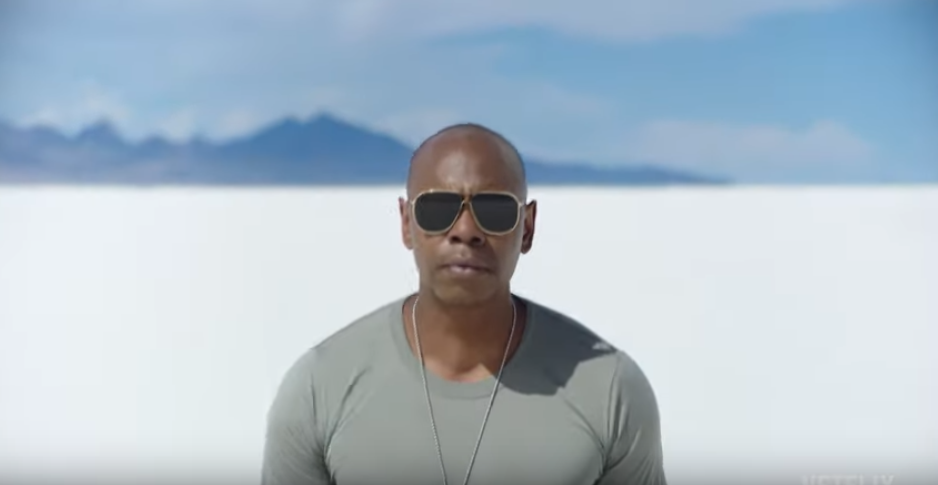 Together, they struck a blow against the PC comedy police that’s already left a mark.

Chappelle’s Sticks & Stones drew copious conservative praise along with ire from the usual suspects, including The Root and Vice.

The special’s RottenTomatoes.com page featured a massive split between the “critic” and “audience” reactions, too. 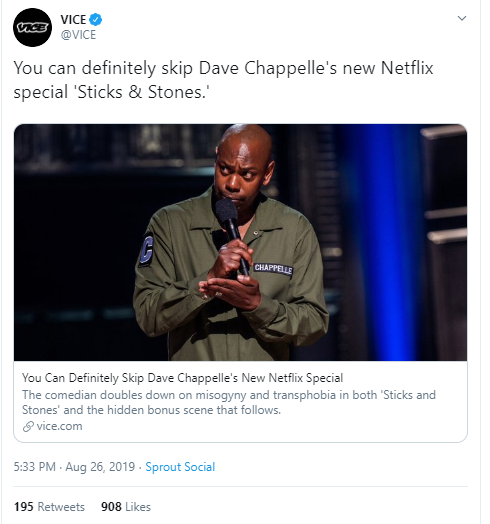 The complaints proved predictable and hyperbolic considering the source: a stand-up comedy routine.

●    He can’t make fun of that group, only that other group!

●    There’s only one way to mock abortion critics!

Now, it’s Burr’s turn. The 51-year-old stand-up is no Chappelle, but he’s equally fed up with woke groupthink.

“It’s exciting to be doing stand up outside of my own country…. every f***ing joke you tell, ‘Well what did you mean by that? I didn’t go the gym today, are you calling me fat?'”

Burr segued into the heat Bryan Cranston faced for playing a disabled man in The Upside.

“‘Why is there an able-bodied person playing a quadriplegic?'” Burr cried, using a beta-male tone not unlike the one Rush Limbaugh uses to mock the far left. “It’s called acting, you dumb f***.”

“Why didn’t you have a murderer play a murderer? And how come the guy he shot showed up in another movie? What the f*** is going on?” he continued.

From there, he mocked Hollywood for obsessing over diversity to an absurd degree. The co-pilot in the Top Gun sequel, for example, will be transgender and the plane will have a gender-neutral potty.

Can you imagine Jimmy Kimmel uncorking that routine? You can’t, because the post-The Man Show Kimmel wouldn’t dare attempt it?

The stand-up pushed harder into the Comedy No-Fly Zone than Chappelle did when he took on former First Lady Michelle Obama. What did she ever do to deserve an arena tour, he asked, before telling a crude sexual gag about her.

It’s tougher than any joke uttered during her husband’s two terms in office. It’s hardly Burr’s best bit, but it’s the kind of material virtually no other comic will touch.

He called feminists “full of s***,” mocking how they cheer for any female candidate for having the same genitalia.

Other hot button topics? The #MeToo movement got the full Burr treatment:

“I think they got everybody!” he cracked. Lately the sexual assaults in question seem less devastating.

“The stories were big at the beginning … then, they started tapering off. Until six months in, they just sounded like bad dates. ‘He was 10 minutes later, the chicken was cold… I think I was raped.'”

The special’s second half follows a more conventional path, letting Burr share personal tales of his marriage and hardscrabble roots.

The damage to the Left’s stranglehold on comedy was already done.

It’s just a comedy special, right? Two in fact, coming just a week apart. It’s not the whole story, though.

And, coming Oct. 25, comic Adam Carolla and Dennis Prager will bring No Safe Spaces to theaters nationwide. The film reveals the toxic impact of PC culture on, and more importantly off, campus. And yes that includes your neighborhood comedy club.

Meanwhile, the far-left Entertainment Weekly shared a new article smiting social critics eager to “cancel” NBC’s Friends 25 years later. The column is as woke as one would expect from EW, but the author argues older material shouldn’t be judged by 2019 standards.

The details from the recent Alec Baldwin roast hit the web over the weekend. Turns out Caitlyn Jenner, on hand to skewer the 30 Rock alum, took heavy comic fire from her peers.

Did the media melt down over the trans jokes? That’s precisely what would have happened six months ago … or less. Remember the attacks on Chappelle for making trans jokes in his previous Netflix special?

Instead, media outlets shared the Baldwin jokes in toto, framing the night as one where Jenner gave as good as she got. You can sense Cosmopolitan itching to be outraged, but the far-left magazine holds its fire.

That’s how no holds barred roasts are supposed to function.

Baby steps, all. But Chappelle and Burr are among the biggest names in comedy. And, if they choose to use their Netflix perch to wrest comedy back from the woke scolds holding it hostage, it could have a transformative effect.

In some ways it’s already happening.

“By the way, this is gonna be my last show ever,” Burr cracked early in Paper Tiger. Turns out he might be wrong.