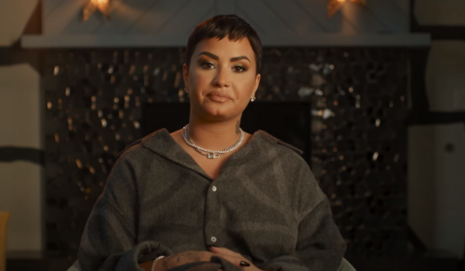 Singer-songwriter Demi Lovato found some fat-free deserts "triggering" while visiting a delightful family-owned frozen yogurt spot in L.A. and decided to enlist the help of the internet in canceling the company. Her malicious move quickly backfired with Piers Morgan calling her out for her temper tantrum.

Morgan, a fan of this particular froyo shop called "The Bigg Chill,” rushed to defend the establishment’s honor after Lovato's attempt to blacklist it.

Morgan explained in the Daily Mail that Lovato “was so disgusted by her experience at The Bigg Chill that she decided to declare war on the store.” She sent out a call to arms to her 102 million followers on her Instagram, tagging The Bigg Chill, saying, “Finding it extremely hard to order froyo from @thebiggchillofficial when you have to walk past tons of sugar free cookies/other diet foods before you get to the counter.” Apparently, the idea of foods being implied to be diet-friendly was "triggering" to her and considered a terrible part of "diet culture."

We’re finding it extremely hard to care about your food triggers, Demi.

She sealed her disapproval with a condescending charge to “do better please”, adding the hashtag #dietculturevultures. If only that were the end of it. In her bout of narcissistic outrage, Lovato decided to mobilize “a new global campaign,” as Morgan described it, posting again on her Instagram, “So I think I’m gonna have to make that hashtag a thing. I will be calling harmful messaging from brand or companies that perpetuate a society that not only enables but praises disordered eating.”

Demi Lovato calls out a Los Angeles frozen yogurt shop for its “harmful messaging” regarding their sugar free cookies and other diet foods. pic.twitter.com/6teLtOaITH

The Bigg Chill shared a response message on its Instagram page saying, “We are not diet vultures. We cater to all of our customer’s needs for the past 36 years. We are sorry you found this offensive. We carry items for Diabetics, Celiac Disease, Vegan and of course have many indulgent items as well.”

Piers applauded the response of the Bigg Chill, who he said “refused to bow down and grovel to its absurd superstar complainant.”

Lovato did not like the back-talk and provided yet more criticism saying, “Your service was terrible. So rude. The whole experience was triggering and awful. You can carry things for other people while also caring for another percentage of your customers who struggle DAILY just to even step foot in your store. You can find a way to provide an inviting environment for all people with different needs. Including eating disorders - one of the deadliest mental illnesses only second to opioid overdoses. Don't make excuses, just do better.”

Morgan appropriately assessed Lovato's spiteful and childish vendetta against the frozen yogurt shop as “patronizing, hectoring, stupendously dumb and bullying bilge,” adding that the outburst was enough to trigger even him. "The more this repulsively arrogant woman attacked this lovely little store in her staggeringly unhinged and delusional manner, the more furious I became. How dare she try to destroy The Bigg Chill simply for doing its job, one that it does very well to widespread popular acclaim? Who the hell does Demi Lovato think she is?" he said.

He then called out the greater issue of cancel culture at the hands of Hollywood elites saying, “Not a day goes by without some celebrity somewhere claiming to feel 'triggered' by something, mainly in an attempt to weaponize their victimhood, raise their profile and make money.”

Morgan himself has been a target of cancel-culture and is an outspoken opponent of the harmful phenomena.