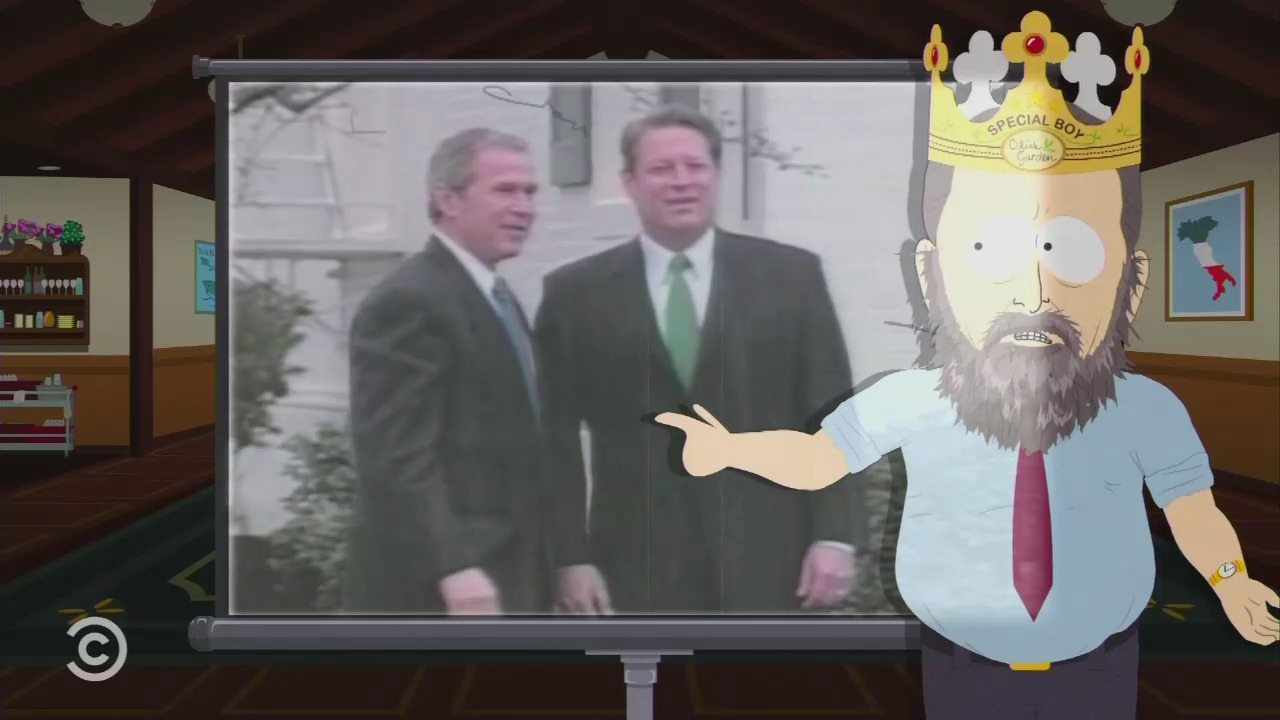 Without addressing the issue by name, it appears as though South Park has changed its tune on global warming in season 22 episode six, titled “Time to get Cereal,” which aired on Wednesday night.

In a 2006 South Park episode released around when "An Inconvenient Truth" came out, former Vice President Al Gore fear mongered over ManBearPig, an animal that was comprised of three mammals: "half man, half bear, half pig." It was a clear metaphor for climate change and shown to be a mythical creature imagined by Gore.

Fast forward to 2018 and now ManBearPig is real and killing people in the town of South Park. The show’s main characters--Stan, Kyle, Cartman and Kenny--realize Al Gore was right all along and seek his help in getting rid of the creature.

Of course, Gore basks in being proven right and only agrees to help the boys if they apologize for making fun of him several years ago and throw him a party at the Olive Garden. Then he leads them in a seance in the woods to seek answers about the ManBearPig demon unleashed from Hell.

Gore: Abbul abash my-ah. What Satan has put forth upon this Earth may it be summoned and banished forever.

Kyle: Dude, come on, what are we doing?

Cartman: This is stupid.

Stan: He was right before.

Kyle: Wait. Wait. Are you videoing us?

Stan: All right. All right. That's enough. You need to stop wasting our time, dude. People are dying! You don't have a [bleep] clue what you're doing!
[ Electricity crackles ]

Gore: You were saying?

By trying to give credence to Gore, it appears as though the show’s creators--Trey Parker and Matt Stone--have bought the line that global warming caused the recent major hurricanes and are switching sides to be with him on the issue.

The most prominent example of this subtle climate change agenda push came in a scene where a man and his wife were out eating at a Red Lobster; the man could be called a "denier" and speaks of ManBearPig as a myth with "no scientific proof, no real evidence" while the monster is literally killing people in the background.

Man: You can't just go along with what people are saying, Susan, okay? There's no scientific proof, no real evidence of a ManBearPig.

Man: Yeah, and a lot of smarter people saying it isn't, okay? What you need to understand, Susan, is that everyone has an agenda. Okay? Everyone wants to use the fear of a ManBearPig to get what they want. [ Glass shatters ] So they throw around bad science, bad taxidermy. [ ManBearPig roars ] People coming out of the woodwork are now experts on the subject. [ People screaming ] [ Roars ] But you have to use your own brain, sweetheart. You can't just let people tell you that if you don't believe in ManBearPig, then you don't care about the world.

Susan: It is real!

Man: You wanna believe it's real, you go right on ahead, Susan.

Susan: What?! We have to do something!

Man: What can we do that everyone else will also do, Susan? Come on, use your brain. Even if we do something about it...... [ ManBearPig roars ] ...What about the Chinese? They're just gonna keep right on--

Notice how the man said China will not do anything about it. Well, it's true, the Chinese emit more carbon than any country on earth.

Given the political leanings of the show’s creators tend to be more libertarian and skeptical, it is surprising that they would attempt to promote this kind of environmentalism on the show now. Ironically, 12 years and one sequel after "An Inconvenient Truth," there is even more evidence that Gore is wrong. Along with all the film's inaccuracies and distortions, he made predictions about global warming that did not come true and rewrote some of his claims to make them seem like they came true, all while the liberal media happily promoted him and suddenly ramped up the hype of "extreme weather" 1,000 percent.

In sum, the ManBearPig myth lives on.