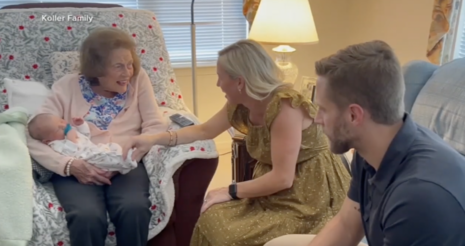 Despite having strict pro-death laws in Pennsylvania, 99 year-old Peggy Koller just celebrated the birth of her 100th great-grandchild. Koller's story is a beautiful testament to life.

Not only is the size of the family a message of the precious value and sanctity of life but the success of the family is as well.

“The family has gone on to include lawyers, educators, real estate developers, and one of Peggy's sons even took over the family business - the well-known Koller Funeral Home in Roxborough,” ABC 6 reported.

As horrifying as this must be to malthusian lefties and environmental doomsayers, this is what the Pro-life Movement has and should harp on. It's important to recognize that each and every child that is killed during an abortion is a missed opportunity for that child to have a life, to succeed in society, and to create a family of their own one day. Killing a child before he or she even takes his or her first breath blocks any potential for successes like the Koller family has displayed.

Mrs. Koller’s story is remarkable, in and of itself. Her longevity is something to look at for inspiration. Chrissy Balster, the mother of the 100th great-grandchild, mentioned that her grandmother’s faith is what provides her strength. “I think faith is the other one, I'd say. Faith and family. That's what's been keeping her going."

In a nation that has been celebrating and promoting abortions left and right, it’s refreshing to see a family openly celebrate more birth. Hopefully the media picks up more stories like these and less stories that celebrate the slaughter of the unborn.