Transgender ‘Female’ REJECTED from Every Sorority at University of Alabama

Last week, Grant Sikes, a freshman MALE at the University of Alabama (UA) attempted to join a sorority - yes, the Greek Life chapter for females. Thankfully, he was dropped the day before bid day. 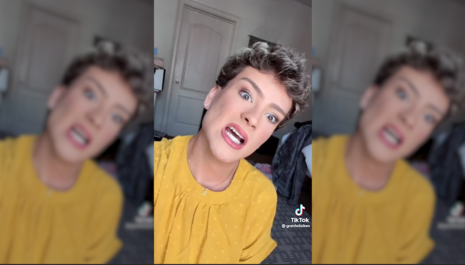 #BamaRush became popular on the TikTok social media app at the end of the summer last year and trended again this year. The trend is for students who are rushing to join a sorority at UA to share the outfits of the day, updates, and day-in-the-life montages so that viewers can see what the process is like. Each year there are a few people who stand out online with the help of social media algorithms. These users are called “the main character of BamaRush.” This year, TikTok’s shining star was Grant Sikes.

Sikes began posting on TikTok on August 6, and by the 8th he had already garnered over 57,000 followers. Now, less than 10 days later, Sikes' TikTok has close to 115,000 followers. While Sikes was being propped up the platform and followers, opponents were censored. I was blocked by Sikes and censored twice by TikTok during the sacrifice that I went through in order to conduct my research. TikTok doesn’t like that I "trust the science" on Grant’s actual gender.

His videos are pretty cringe if you ask me and honestly seem like a parody or mockery of women and girls.

The sororities may have agreed, as all but two sororities dropped Sikes prior to the first day of rush week. And on the day before the concluding ceremony called “bid day,” a phone call indicated that Sikes wasn't chosen to be part of any female sorority. I don't blame the sororities whatsoever.

On Saturday, Aug 13, Sikes posted a TikTok video expressing how sad he was that he can’t “be a part of a sisterhood.”

On Instagram, which I had to view via a private browser due to Sikes blocking me, he posted a four paragraph lament about his terrible, horrible, no good, very bad day.

Unfortunately, this chapter is closet. This recruitment journey is over for me. Being dropped from my last house this morning during primary recruitment at the University of Alabama doesn’t come as a surprise considering out of the almost 20 chapters- I was dropped by every single one except 2 before day 1.

I am hopeful of a future where everyone is welcomed for just being themselves — everywhere.

I knew Sikes would act in such a manner when I broke this story last week after one of MRC’s interns, Aubrey Tuell, was censored for questioning Sikes’ place in a FEMALE sorority (redundancy intended).

“He’ll probably throw a diva tantrum and complain that the school is transphobic,” I wrote last Monday.

Perhaps Sikes was dropped due to the fact that, regardless of what's between his legs, he wasn't a good candidate for a sorority. Sororities were set to be a distinguished group of young ladies who aim to serve the community. In order to be accepted, women need to have a certain GPA and good tract record. Some users speculated that Sikes did not meet the criteria regardless of being a biological male and that may have been the reason for his rejection.

It’s unlikely that we’ll ever know why Sikes was officially dropped as there's a large amount of secrecy dealing with Greek life.

All I can say now is that this is a win for the safety and sanity of the actual girls in sororities at the University of Alabama. Roll Tide ladies.