Call 911! Right-wingers are trying to save babies! 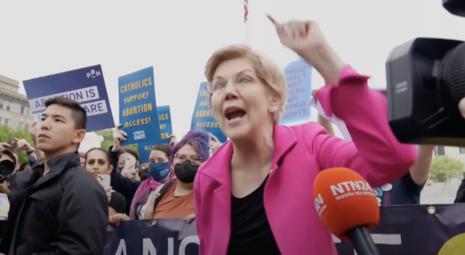 On July 13, more than 80 house democrats signed a letter to President Joe Biden asking him to issue a national emergency in response to Roe’s overturn. As of July 14, 18 Senate Democrats have John Hancocked the letter, according to HuffPost.

Senators reportedly called the situation “an emergency” and stated “The Biden-Harris Administration has already taken important steps to defend abortion rights in response to escalating rightwing attacks … But you have the power to do more to address this crisis.”

This letter comes at a time when red states are passing lifesaving legislation to help combat the slaughter of the unborn. Though these laws aim to spare the lives of innocent children, nearly 100 Democrats and their posse of abortion supporters think Biden needs to stop them.

Senator Psycho Elizabeth Warren (D-Mass) told HuffPost that the Supreme Court ruling was “extremist.” Very on brand response from the woman who nearly lost her voice and had a heart attack when screaming at the Supreme Court. “I strongly support the Biden administration’s executive actions on reproductive rights. Declaring a public health emergency should be the next step,” she said, undoubtedly with her finger pointed out aggressively.

Biden did sign an Executive Order on July 8 all but denouncing Supreme Court and promising abortion access expansions, but Senate Democrats still want more. HuffPost noted the letter indicated that “declaring a public health emergency would allow Biden to ‘unlock powerful flexibilities and resources for federal, state, and local governments.’”

HuffPost was unsurprisingly in support of the call for a public health emergency:

If Biden declared a public health emergency, it would also aid physicians providing abortion care in health- or life-threatening situations — something HHS announced this week it’s specifically focusing on. Additionally, it would allow HHS to deploy federal, state and local medical personnel across the country — especially to rural areas where abortion access has effectively disappeared.

It's unsurprising how far abortion activists will go to keep killing babies. The national emergency should be for those who still don’t think abortion should be stopped, not for those who actually value life.