Texas Governor Greg Abbott may have signed a law that prohibits abortions after a baby’s heartbeat is detected, but Austin, his state's capital, is pushing to neglect that law. 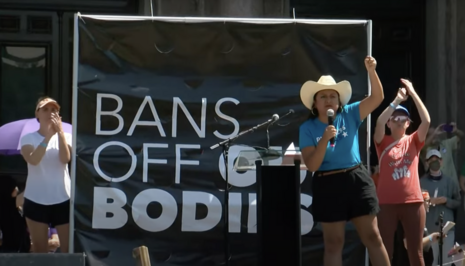 Remember kids, following laws are up to each person's own discretion, nowadays.

According to Politico, Texas Republicans faced pushback from the city's Democrats after state lawmakers announced a "trigger" law that will go into effect within 30 days should Roe v. Wade be overturned by the Supreme Court. The law would criminalize abortion as a first-degree felony punishable by up to a $10,000 fine.

In response, Austin Councilmember Chito Vela proposed a new “resolution" that would “direct police to make it their lowest enforcement priority in an effort to skirt conflict with state law.”

Because police should make it their lowest priority to enforce a law that's saving lives. That makes total sense.

“I don’t think the police want to dedicate resources to these types of, what I would call, ‘political crimes,’” Vela said.

The Hill reported that "The resolution would restrict city funds from being used to investigate any kind of alleged abortion crimes."

Vela provided the supposed intention of the resolution.

It does not directly halt enforcement, but it severely limits the ability of the city or any staff to collect or provide evidence for prosecutions. It also preemptively bans surveillance of anyone or anything related to suspected abortions outside of some limited exceptions, like coercion or force.

The resolution needs to be passed by the City Council to go into effect. But if history repeats itself, it is likely that the council will oblige, given that "the council passed a similar measure in 2020 that effectively decriminalized marijuana by ending arrests and fines for low-level possession, which the police department has followed," the Hill explains.

Austin officials and surrounding cities think that turning a blind eye to laws they don't agree with - in this case the murder of babies - is the way to go.