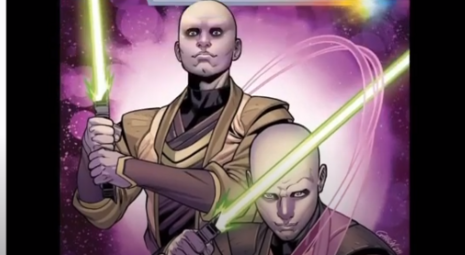 Unfortunately, this isn’t an April Fools joke. Star Wars: The High Republic has once again joined the alphabet community.

On Wednesday March 31, the Star Wars social accounts released the exclusive cover for High Republic #6. In “honor” of Trans Day of Visibility, a made up holiday to bring awareness to the deeply confused and attention-starved, Star Wars shoved politics down fans’ throats once again.

The woke is strong with the brand. The cover featured Jedi characters, Terec and Ceret, who are “non-binary.” On Facebook and Instagram the captions read:

In honor of #TransDayOfVisibility we're proud to unveil an exclusive cover highlighting Terec and Ceret, trans non-binary Jedi, currently featured in Marvel's The High Republic comic. We support trans lives and we are passionate and committed to broadening our representation in a galaxy far far away. #TDOV

Too bad the whole franchise just doesn’t go “far far away” at this point. There can’t even be a comic without left-wing politics creeping in.

Fans and co-stars shared mixed feelings about the concept. Chewbacca welcomed the non-binary Jedi to the family and commented “#TransRightsAreHumanRights.” And comedian Bobby Moynihan (fan turned Star Wars actor) added some red hearts to the Star Wars Instagram post … should we call him out for not being inclusive enough with heart colors?

Luckily, a few level headed fans commented too. Dirk Smith, who received 347 likes on his comment on Facebook, said “not every story has to talk about private issues” and Steve Conwell summed it up as, “STAR WARS: The Woke Republic, where the universe and the stories are molded around your political agenda.”

Even despite the mixed reviews, it’s unlikely that Star Wars will back down now. Back in 2020 they pushed the “inclusivity” envelope. The woke company put out Star Wars: Squadrons where they gave one character they/them pronouns.

The one-sided bias is ridiculous. How is it fair that Lucasfilm, who launched Star Wars: The High Republic, promotes this far-left garbage but when one of their actors has an open opinion (on her personal social pages) about conservatism, they fire her?

So much for “Inclusivity.”

Someone call up Star Wars and ask why these non-binary characters aren’t holding rainbow lightsabers! Where are the SJWs when we need them!?