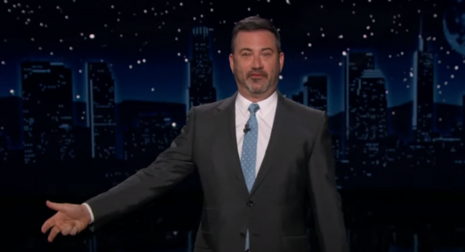 How smart does someone have to be to be a late night comedian? Obviously, not very.

On Tuesday night's episode of Jimmy Kimmel Live, Kimmel attempted to roast the sane people who think a vaccine passport is dumb and threw jabs at Donald Trump as well. The Daily Beast covered the segment called “Republicans’ Dumb Fight Against Vaccine Passport & Trump is for Hire!” and per media bias nature, the author, Matt Wilstein, seemed to be in complete agreement with Kimmel. Yikes for the both of them!

Since more and more people are receiving the Coronavirus vaccine and others are rejecting it, Biden’s plan to save the world involves a “vaccine passport” set to be required for travel and large-scale public events. As “many Republicans aren’t on board with that” including Ron DeSantis, whom Kimmel referred to as “the terrible governor of Florida,” Kimmel noted that the stance is “very rich coming from the party that wants nine forms of identification before you can vote.” Please, it's showing ONE ID that has Democrats screaming "Jim Crow!"

The mouthy segment didn’t stop there. The other “dummy” Kimmel referenced was “Klan Mom” Rep. Marjorie Taylor Green (R-GA) when she called the passport “Biden's mark of the beast.” I mean, what better name is there for physical documentation giving all praise to Biden?

In Kimmel's objection to Taylor Green calling vaccine passports “fascism or communism,” he actually claimed, “Fascism and communism are literally opposite things” - who's the dummy now?

Kimmel also spoke on Trump’s new website that launched at 45office.com calling it a “fan page for himself” and referring to him as a “bookable birthday clown.” If Trump (who is more successful than Kimmel could ever be) is a “clown” then Kimmel is a straight up piece of trash.

On Trump’s website you can “book” the former president for events and request a personalized letter from him. Honestly, the former president is more interested in connecting with the American people than current President Joe Biden considering he waited 65 days to partake in his first formal press conference.

Kimmel, and most of the media, doesn’t see it that way, however. Their one track mind that all Democrats are good and all Republicans are evil is permanently seared in their hypnotized little brains. Honestly, I think they’re the ones who are the dummies