Who’s going to be the one to let Aesop know that his fables are not very “gender-safe”? 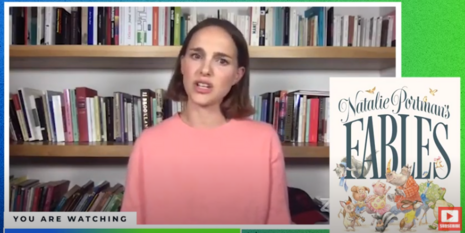 Natalie Portman, Academy Award-winning actress for Black Swan, released her own version of classic children's fables titled “Natalie Portman’s Fables.” Bounding Into Comics reported on her book that retells “The Three Little Pigs,” “The Tortoise and the Hare,” and “Country Mouse and City Mouse” to impose a more feminine twist.

Portman’s inspiration came from the birth of her daughter back in 2017 after her distaste for the books she was gifted on “feminist babies” and “fierce girls” who “changed history.” Portman wanted her daughter to read the “regular” books that she read to her son, according to a letter she wrote on her book. In a segment with The Tonight Show Starring Jimmy Fallon she noticed the male-dominating characters in the classics and didn’t like the overwhelming emphasis on only empathizing with males.

Portman thought the traditional classics were too male so she rewrote the “skewed” fairy tales. She also wanted to reflect the world “more as it is where there’s all genders” according to a Good Morning America interview back in October. She said, “For boys to see women in positions of power is almost more important than for girls because I think that is the way we raise a generation that will just look at all genders as human and that's how we get to equality.”

In her letter she also said “Half of the animal kingdom is female, and half is male, and some are neither or both.” I guess you can have a gender fluid dog now? Wow.

Portman even admitted that other than changing the gender of the characters, she changed some of the morals and lessons of the classic tales as well. She should have just made new stories entirely since barely anything is carried over from the multi-century old fables.

Of course the classics are too out of bounds for SJWs like Portman. Why can’t celebrities just stay in their own lanes? Look at Matthew McConaughey who might run for Texas Governor.

Portman wanted to defy the gender stereotypes just like she's doing as the female version of Thor, goddess of thunder in Marvel’s “Thor: Love and Thunder.” Ironically, Portman attempts to spread the message that there’s no “right” way to live as well as to gender include everyone … yet she has no problem vocalizing and encouraging others to support her own political views.

Go buy the original classics before rewrites from the woke officially take over.