Stephen King: Republicans Are 'In Favor of a Trump Dictatorship'

Stephen King wants President Donald Trump out of the White House, and not even The Constitution will stop him.

The famed horror fiction writer has a blatant hatred for the President and cannot wait to see Joe Biden in office (even though he hasn’t officially won), as evinced by a tweet he posted on December 10: “Donald, you're fired. Someone call Security. Have him get his things in a couple of cardboard boxes and escort him the fuck out.” It’s like he’s never heard of the 20th Amendment.

Why can’t King be a good boy and wait until a winner for the election has actually been declared?

King had pulled a similar stunt about a month ago, when he ordered President Donald Trump on Twitter to “concede and get the hell out.” Does he plan on doing the same in January?

Perhaps King’s unconcealed impatience for Trump’s exit has negatively affected his reasoning, because he started tweeting posts on December 10 that compared legitimate government procedure to an attack on democracy: “Republicans asking the Supreme Court to overturn election results in four states have given up on the democratic process In favor of a Trump dictatorship.”

Given their attitude, it’s a surprise that King and the wokes didn’t consider the last four years a dictatorship (perhaps because it wasn’t?).

King later retweeted a post from a reporter who claimed that a group of Republicans wanted the presidential election “to be invalidated because their party lost.” King added his own commentary in dramatic fashion: “They have committed treason against the United States of America.” 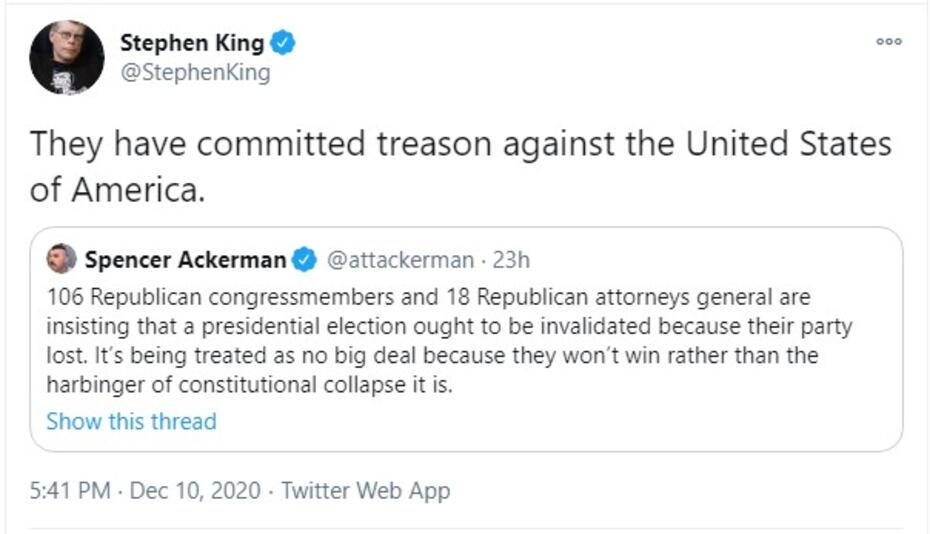 What’s more treasonous, supporting the killing of American infants (like the esteemed Democrat candidate Joe Biden does) or investigating claims of election fraud?

King’s just being overly dramatic, partly to spread misinformation, and partly to vent his anger over the existence of “traitors” who would dare prevent his beloved candidate Joe Biden from taking office.

For all his rantings and ravings about Republican dictatorship, why is King screaming for Trump to vacate the White House? Even if he did lose the election, the 20th Amendment to The Constitution ensures Trump the right to remain there until January, and Joe Biden isn’t allowed to be sworn in until then. Is King sure that he’s not the one threatening American democracy?