Since 2013, the Boy Scouts of America have quickly caved to the progressive agenda, admitting both homosexual guides and scouts. As of today, transgender boys can now join troops.

It was only a matter of time before this change took place. In December, the family of eight-year-old Joe Maldonado filed a lawsuit against the BSA when Joe, born as Jodi, was dismissed from a New Jersey troop. The media widely heralded the story, and it took just over one month for BSA to yield and amend the policy.

“After weeks of significant conversations at all levels of our organization we realize that referring to birth certificates as the reference point is no longer sufficient,” Chief Scout Executive Michael Surbaugh explained. “Communities and state laws are now interpreting gender identity differently.”

Today, the network morning shows spent just over 6 minutes on the news, with CBS and NBC highlighting Maldonado’s reaction. “For children like Joe, the new transgender policy is ground breaking,” NBC’s Miguel Almaguer stated. “A historic institution built on values now reevaluating their own to be more inclusive than ever.” 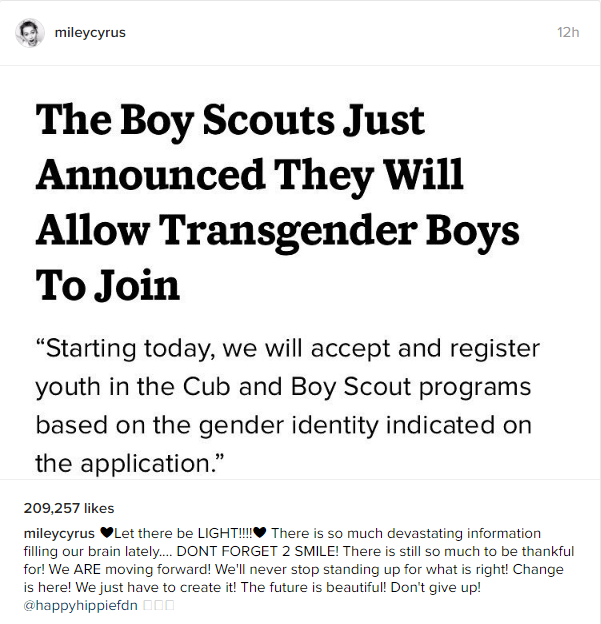 Although the networks did spin the news positively, Almaguer pointed out that some advocacy groups “criticized” the move. Reporter David Begnaud also noted that although CBS had reached out to “organizations promoting traditional family values” for comments, neither Focus on the Family nor the Family Research Council responded.

CNN reporter Emanuella Grinberg acknowledged BSA’s past controversy over LGBT issues, but only quoted supporters of the policy change. Zach Wahls, co-founder of Scouts for Equality, commented that it was an “important step forward.”

As an avid LGBT advocate, singer and actress Miley Cyrus was triumphant at the news. "Let there be LIGHT!!!!!" she posted on her instagram account. "We ARE moving forward! We'll never stop standing up for what is right! Change is here! We just have to create it! The future is beautiful! Don't give up!"

Because scouts are required to acknowledge their duty to God, the BSA still prohibits avowed atheists and agnostics from membership. Eradicating this stipulation will likely surface as the next item on the progressive agenda.