The fact that Boy Scout membership is limited to males has not always been newsworthy. However, in the current media landscape, such a “controversial” claim garnered three minutes of network airtime and copious online news coverage.

But the real controversy centers on what boyhood entails. Or how the media feel about it.

Boy Scouts of America (BSA) has always predicated Boy Scout and Cub Scout membership on being biologically male. But what did that mean for little girls who identified as boys? Some joined troops without any issue. One transgender 8-year-old—first known by Jodi and now as Joe Maldonado—had such an experience.  But one month after the New Jersey resident joined, several parents complained and the child was asked to leave Cub Scout Pack 87 in Secaucus.

When outcry followed the ouster, BSA reiterated its obvious position on male membership. Furthermore, representatives clarified that, according to a 2015 policy change, “no youth may be removed from any of our programs on the basis of his or her sexual orientation,” noting that “gender identity isn’t related to sexual orientation.” An AP story reprinted in Cosmopolitan magazine mentioned that the BSA has not responded to inquiries as to whether it would admit transgender girls, who of course, are biologically male.

In an interview with the Star-Ledger, Maldonado declared: “I’m way more angry than sad. My identity is a boy. If I was them [BSA], I would let every person in the world go in. It’s right to do.” 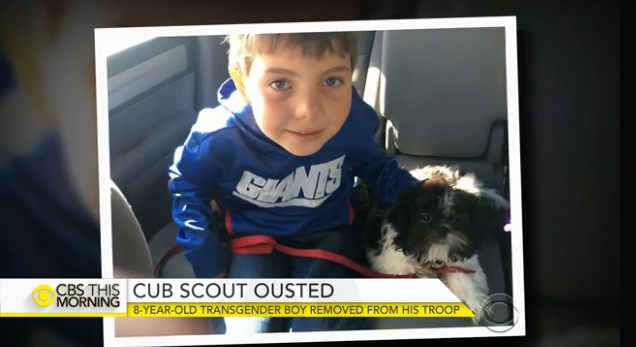 According to a three-minute December 28 segment on CBS This Morning, BSA’s recommendation of co-ed programs have not satisfied Maldonado’s mother. She wants an official apology, and many are siding with her, including CBS reporter Errol Barnett and Scouts for Equality Director Justin Wilson.

“She just wants to do what makes her child happy, this isn’t about anything other than that,” Barnett expressed on-air. “Hear, hear,” commentator Josh Elliott chipped in.

According to LGBTQ Nation, Wilson thinks this may be a “landmark case.” And he should know. Scouts for Equality was partially responsible for pushing BSA to lift its national bans on gay scouts and leaders in 2015.

So will BSA buckle from the pressure of media and activist groups? If precedent is any indicator, the policies may very likely change to establish identity, rather than biology, as the primary right of scout membership.