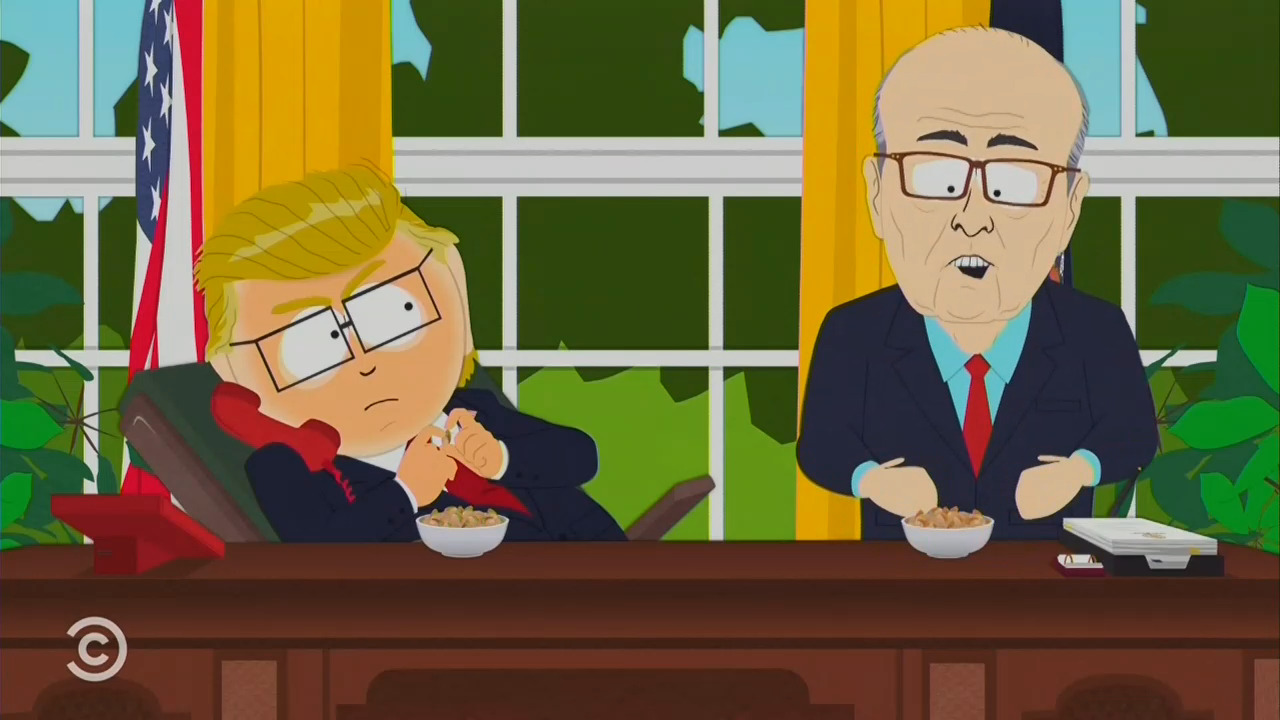 South Park's "Season Finale" episode, which is not actually the season finale, really goes off on President Trump and Rudy Giuliani when Randy Marsh is arrested on felony charges.

In Wednesday night's episode, everyone in South Park is sick and tired of Randy and his shenanigans involving tampering with homegrown weed and when they find video footage of him burning someone's crop they jump on the chance to "lock him up."

When Randy is put in jail he calls upon the President for advice on how to get the public to stop looking into his business. Randy's told to deny, play the victim and go on attack.

President: Well, did you tell everyone you didn't do anything wrong?

President: Well, did you then go on the attack, and swap the accusations, to make yourself a victim?

Randy: Uh...um...hey, you -- you blew up people's yards who were growing their own marijuana.

President: No, I didn't! Are you joking, you psychopath?! Now you're blowing up my yard! Go ahead. Try another one.

Randy: You -- You illegally damaged property to make your business--

President: You damaged property to make your business more profitable, you lying sack of shit! I'm not gonna be bullied by you! See? It's really not that hard. It just takes a little chin wiggling.

Randy: Geez, you're really good at that. Look, what I really need from you is some personnel. Do you know any good lawyers?

President: Do I know any good lawyers? No. But I do know Rudy Giuliani.

President: No, [bleep] You, Rudy. You finish cleaning up those pistachio nuts yet?

Giuliani: Yeah. That's all of them, Mr. President.

The whole episode screams anti-Republican, and anti-Trump, with a special hatred toward Giuliani who is called a "treasonous pig" and shown taking off his pants and pulling smuggled marijuana out of his behind to give to Randy in jail.

Randy is only freed from his trial and imprisonment when he apologizes to the town and says, "Maybe the president has brought down my moral meter. I don't mean to cast blame, I'm to blame, but, ever since he was elected I've compared my morals to his. And no matter how awful I am... I'm never as bad as the president so I'm okay."

The rest of the episode involves the White family clamoring for justice for "the Whites" and another anti-ICE scene where the White family adopts a Mexican boy and treats him more like a dog than a person.

This episode is a bit of a disappointment due to the previous episodes of South Park this season that called out Communist China and also Lebron James for his response to the citizens of Hong Kong.