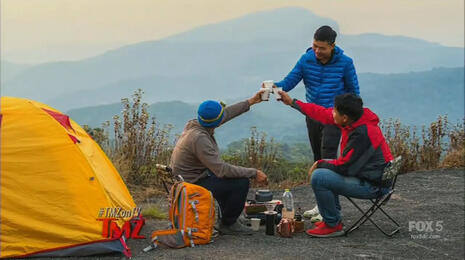 The August 10 profile piece by Chace Beech also spent a considerable length lamenting the racial aspect of camping, evoking segregation on public lands. “National parks have a history of segregation that dates to the 1930s,” the piece read before admitting that this “change[d with] the passage of the 1964 Civil Rights Act.” It’s also a matter of how “many of those Native American tribes were pushed off their land, often violently, to create an illusion of untouched landscapes.” Ah, right, where would we be if we weren’t constantly reminded of the nation’s mistreatment of Native Americans from years ago?

And yet, Beech says this carries on today: "years of segregation, racism and displacement continue to define national parks and other public lands as predominantly white spaces," as if camping is some kind of "whites-only" club.

The disparity in access to the outdoors is particularly frustrating to Harris, who pointed out that those who could most benefit from being in a rural environment have often felt excluded. “Being in nature is healing,” she said. “People who need that healing most are Black and Indigenous people, and the idea that it’s inaccessible … it’s just not right.”

One of the recipients of the camping kits agreed that the ability to connect with nature is even more important for BIPOC because of systemic racism:

“It’s a precious gift, especially for someone like myself and, I think, for a lot of people of color,” [Ale] Abreu said, “because of systemic oppression, because of racism, economics and all these things we have to navigate — it can all result in a de-centering.” Camping, Abreu said, allows re-centering in the midst of social and political chaos. “It’s a moment to catch your breath.”

Jackson intends to expand the BIPOC Camping Kits venture. “Black and Indigenous people have historically had connections to nature and the land that have been stripped from us,” they said. “My bigger picture is full solidarity; it’s going to take all of us coming together to topple these racist systems so we can find our sacred places again, and find peace again, together.”

Then there’s the predictable mention of “white guilt.” It wasn’t enough for people of all races and beliefs to come together to speak out on the deaths of George Floyd, Ahmaud Arbery and Breonna Taylor. Jackson attributes the rise in donations to her camping kits project to how “people just cared more all of a sudden.” Jackson continued to note, “I think there is a lot of white guilt right now,” explaining why donations suddenly took off. “We’re all learning and growing; sometimes guilt is part of it too — not that we want guilt and shame, but we do want growth.”

“Car[ing] more all of a sudden” might have a nice touch to it. But then Jackson said “we’re all learning and growing,” when it's obvious that the intended target is white America, if only because “white guilt” is evoked immediately before. Jackson claimed that they don't "want guilt and shame,” but, why say it, then?

Other aspects of the article address a desire for black Americans to be able to enjoy camping as much as Jackson and their friends did, by raising equipment, funds, and working together with Next Adventure, whose co-owners praised Jackson’s actions, expressing support for both such a project and “helping support our community in getting outdoors.” Why can’t the Los Angeles Times and Jackson focus on encouraging Americans to come together on this? How many people will truly be convinced based on being reminded of their “white guilt?” Couldn’t such a tactic have the effect of causing division, of turning people away?

Further, barriers to camping have more to do with cost, why didn't the profile clarify, preferably emphasize, that? Why not talk about poor Americans, of all races, who are not able to afford camping? Clearly, it's because the left wants to make everything a matter of racism and that “white guilt.”