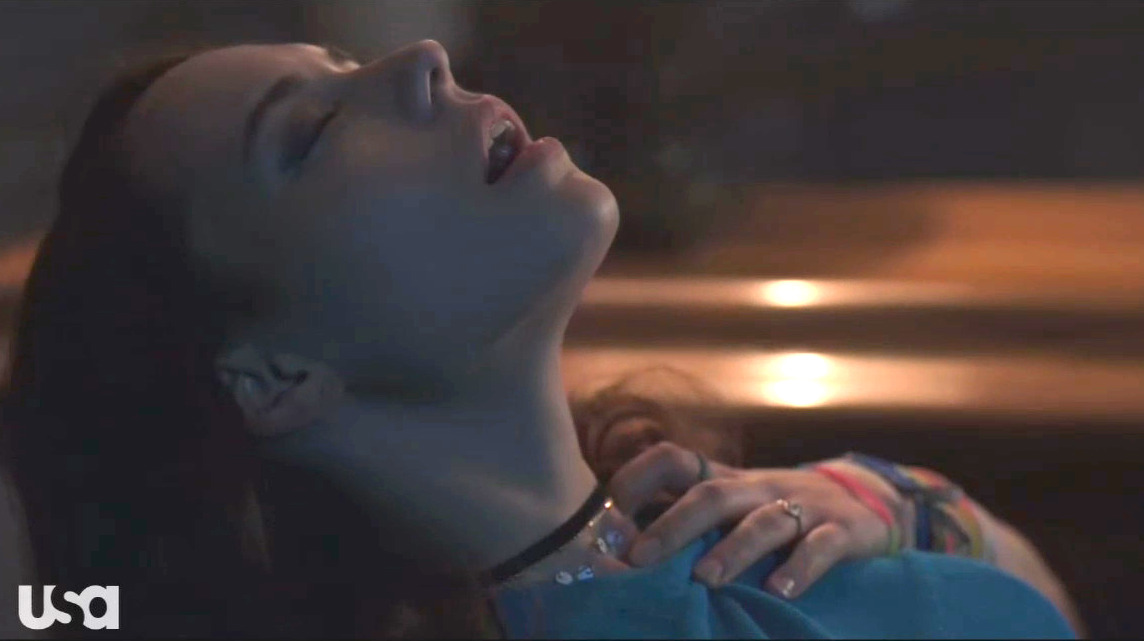 By the end of the third episode of USA’s Dare Me, it’s perfectly clear that there may not be any good guys in this dark high school cheerleading drama. All the teens are either abusing each other, abusing alcohol, covering up for a coach’s affair, or getting older men to perform sex acts on them.

Center stage is Beth (Marlo Kelly), aptly described in January 12’s episode, “Surrender at Discretion,” as a “hellion,” although, it can’t be easy to be on the same cheerleading team as her younger half-sister, the product of an affair between her father and next door neighbor.

Beth’s best friend is Addy (Herizen F. Guardiola), the more level-headed of the group. But if Addy babysitting their coach’s baby seems sweet, it’s tainted by how it’s so that the coach, Colette (Willa Fitzgerald), can have an affair with a high school flame, Will Mosley (Zach Roerig), who is also a Marine recruiter at the high school where Colette coaches.

Beth is clearly trouble. When she’s not beating up on her half sister or running her mouth, she’s smoking cigarettes and drinking, even - or especially - if she’s driving. In case you’re wondering how Beth can hold the wheel and a bottle at the same time, have no fear, as she has a friend pour liquor straight into her mouth.

While the rest of the cheerleading squad is at a party thrown by Colette, Beth stays in to have a cigarette and drink, while her mother is upstairs. Although she’s not home alone, in walks her older boy toy, Corporal Kurtz (Chris Zylka), with a frank discussion of what they plan on doing, and where.

Beth: Welcome to the island of misspent toys.

Cpl. Kurtz: It'll do. All by yourself tonight, rich girl?

Cpl. Kurtz: No little friend? I thought girls like you traveled in packs.

Beth: There's been a culling of the herd. I, um...I thought we were going to your place. Over by the Towers.

Cpl. Kurtz: No way, walls are too thin.

Beth: Yeah, I bet they are. My dad built that place. So Sarge Will's right next door?

Cpl. Kurtz: Yep. I didn't want him to hear you. You look like a screamer.

Beth: You ever hear him through those walls? Maybe with some skanky chick, phlegmy voice?

Cpl. Kurtz: You wanna waste our precious time talking about my boss? He catches me with jailbait... Then I'm ass-fucked.

Beth: Who says you're not gonna get ass-fucked anyway?

But Beth and Corporal Kurtz’s sexual dialogue doesn’t end there.

Cpl. Kurtz: Aren't you empowered or some shit like that? Just own it: You want that dick.

Beth: I'm not into your dick. Show me what else you got.

The two don’t have sexual intercourse, but age hardly seems to be a factor. Beth would rather be empowered by Corporal Kurtz performing oral sex on her, which he obliges and the audience gets to see.

If there’s a theme about this show, it’s that everyone seems to have something to hide, from affairs to statutory rape. Cute.