If you thought it was sick how abortion advocates celebrated Valentine’s Day, wait until you see how they marked Mother’s Day.

And yet that’s exactly what abortion advocates did.

Planned Parenthood clearly misses the idea that women who lose their pre-born children, even to abortion, are, indeed, still mothers. But nice try with this tweet using the day to make it about women who choose not to be mothers. Being a mother is about our children, not about “our rights” when those “rights” and “do[ing] what they want with their own body” includes aborting another human being.

Happy Mother's Day! It’s important now more than ever to protect our right to make decisions about our own bodies and our own lives — and that includes being able to decide if and when to become a mother. #MothersDay pic.twitter.com/X4dF8EQeqK

Planned Parenthood President Dr. Leana Wen tweeted a video featuring her 20 month old son, Eli, and a message to “make our health and well-being a priority.” This would not include abortion, since abortion isn’t healthcare and can actually psychologically and physically harm women.

This #MothersDay, let's make our health and well-being a priority — because we know that healthy families and strong communities begin with healthy moms! pic.twitter.com/5fB75L61JC

Here’s an email from @PPFA and @DrLeanaWen, fundraising off of Mother’s Day. The cognitive dissonance is staggering. No organization does more to encourage and facilitate the rejection of motherhood than Planned Parenthood. pic.twitter.com/KKk1Lk9gdK

Planned Parenthood also retweeted a celebration of mothers who don’t identify as women, but as Transgender, non-binary & gender non-conforming.

#Trans #nonbinary & #gendernonconforming #mamas have always nurtured us! This #MamasDay2019, we see you, we celebrate you, and we commit to building a world that supports you. Send or download a card & sign the pledge at https://t.co/owEh2y2oR0. Art by Ethan X. Parker. pic.twitter.com/ImQZq3XKHI

NARAL Pro-Choice America tweeted about this, linking to a Parents.com article featuring “brave” women who have had abortions. 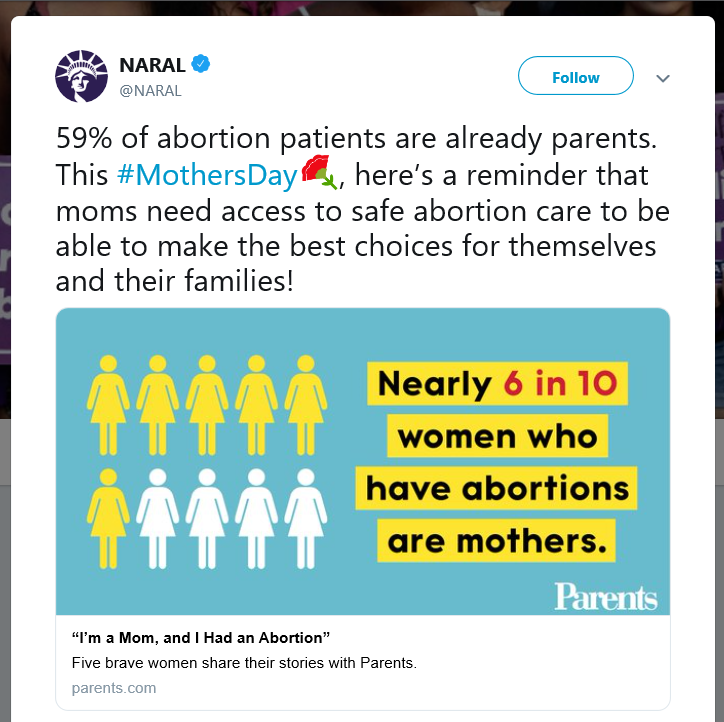 What is even worse is abortion advocates using #ParentsHaveAbortions for Mother’s Day - saying "parents" instead of "mothers" is their way of including trans men.

We Testify was all over this ugly trend as well, even featuring a story of a mother who claimed she was “able to love and myself and my children so much more than I ever imagined.” In a way, the hashtag sets living children against their aborted siblings by seeking to normalize or excuse abortions performed on those mothers who already have children.

Abortion must be accessible for all when needed. #ParentsHaveAbortions, so adding barriers to abortion negatively impacts the families they’re already raising. pic.twitter.com/kiGw4fL3wC

Another said she was “afforded… the experience and opportunity to parent on my own terms, building a relationship with my daughter based on truth and transparency.” She really couldn’t do that without aborting her daughter’s sibling? 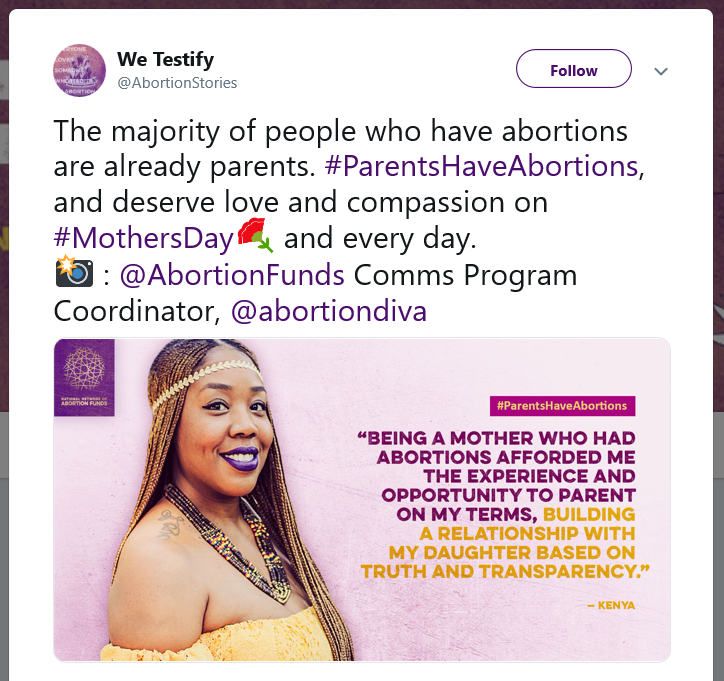 NARAL also tried to appeal to “those struggling with infertility or pregnancy loss.” Something tells me these abortion groups aren’t thinking of children lost to abortion, or women who could suffer from infertility as a result of their abortions. 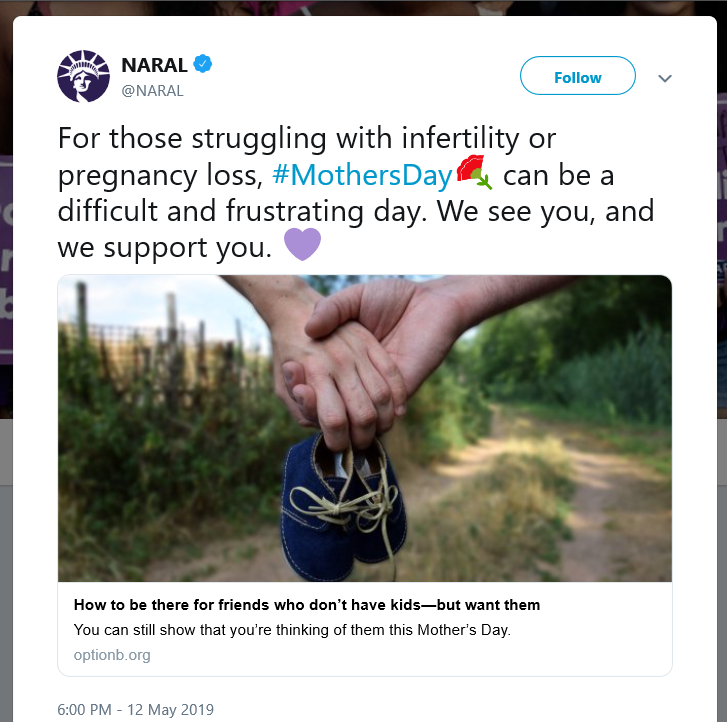 As NARAL mentions, there are those who have "a difficult and frustrating day" on Mother's Day. And to too many it’s because of the horrors of abortion.