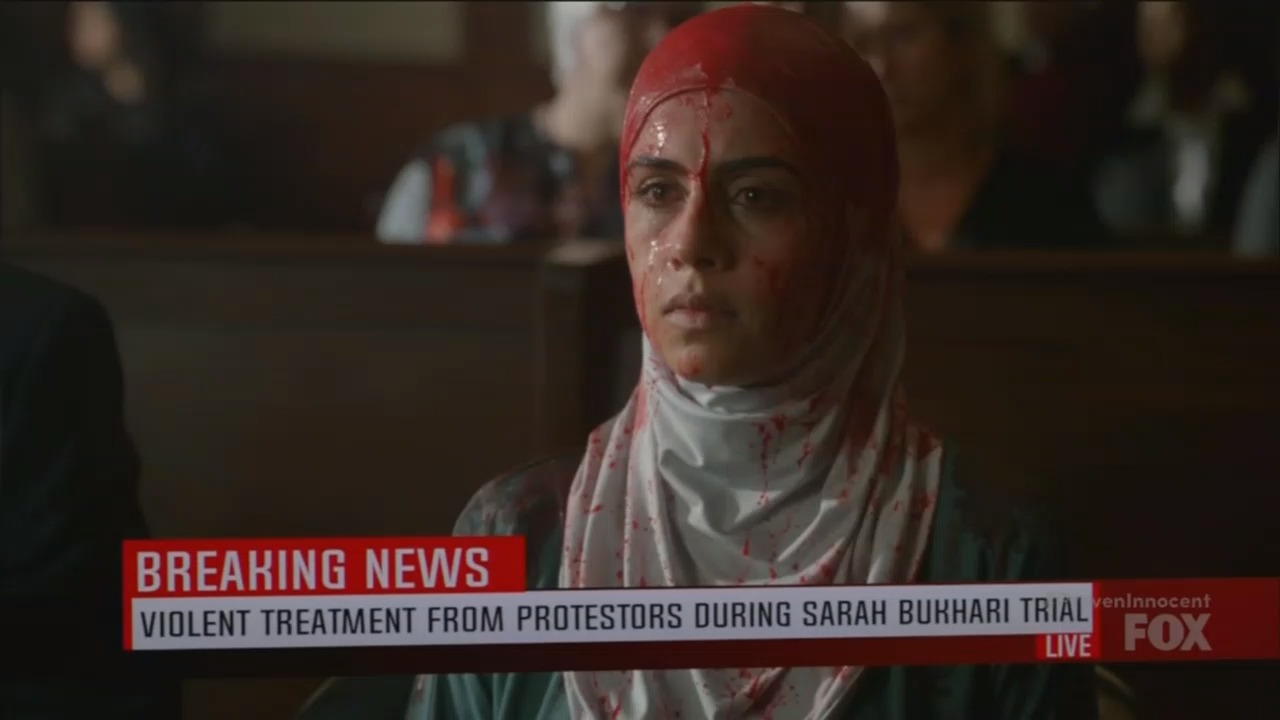 Pro-lifers take it on the chin again. On March 8’s episode of the critically panned Proven Innocent on Fox, “The Shame Game,” viewers are immediately treated to a radical display of clamoring and screaming pro-lifers making their presence known before the trial of a Muslim woman, Sarah Bukhari, who is charged with both feticide and homicide for dumping the body of her newborn child in a construction site trash bin.

On her way into the courthouse pro-lifers dump a bucket of fake blood over her head and she's forced to sit like that during her trial. Bukhari is found guilty and given a 25-year sentence - that is, before our show’s protagonists sign up to take over her appeal, on the basis of how "the only reason" she was charged was because she's Muslim and it was "a pro-life statement." Of course.

Lawyer: Excuse me! Out of the way please.

Newswoman: Sarah Bukhari received a violent response from protesters on the first day of her trial for murdering her unborn child.

Madeline: To this day, I still can't believe the judge made her sit in court like that.

Lawyer: He did everything he could to show the jury his disdain for her.

Easy: Why do you want us to take over her appeal for you?

Lawyer: The only reason they tried her for both murder and feticide was because she was Muslim. It's been seven years, and the hatred for our people has only gotten worse. I believe you will do much better with this judge than I ever did.

Easy: The key piece of evidence against her was the Mexican abortion pills she bought online.

Lawyer: She never took those.

Easy: There-there was no trace of mifepristone in her system. Just because you can't detect the parent drug doesn't mean it wasn't taken.

Madeline: Even if she did take them-- 25 years for a late-term abortion? It's draconian. And if she didn't, her whole life has been ruined over a miscarriage.

Easy: Let's not forget, she left a fetus in a construction site trash bin. That's why she was convicted.  Why did she do it?

Madeline: Because she was ashamed.

Violet: Shame is a cancer. It eats away at us from the inside. It is the sworn enemy of the truth, which may be its only cure. On this week's episode of until Proven Innocent, we'll follow the story of Sarah Bukhari, who was sentenced to 25 years in prison for trying to hide her shame.

Sarah Bukhari: I knew I was pregnant, but I didn't know how far along. So... When I delivered, I was in shock. The baby wasn't alive, but there was so much blood, I... I Ju... I... I panicked, and I tried to hide what happened.

Madeline: How did you not know you were five months pregnant?

Sarah Bukhari: I was scared that if I went to a doctor, my parents would find out. They are very religious. And an unwed pregnancy would bring great shame.

Easy: One of the most damning pieces of evidence in your trial was the abortion pills you bought online.

Sarah Bukhari: I didn't take them. I changed my mind and threw them away.

Sarah: I know how it looks, but it's not what happened.

Madeline: Sarah, even if you did take the abortion...

Madeline: Even if you did, the severity of your sentence was to make an example of you. It was to scare other women from seeking abortions.

Sarah: Maybe I... Deserved this. Maybe I should end the appeal and accept this as my fate.

Madeline: No, you accept nothing. Your baby was stillborn, and you panicked. You don't deserve to lose the rest of your life for one mistake.

Lawyer: Let them fight for you, Sarah. I already got them permission to try this case in Indiana.

Sarah: I'm scared to go through this again.

Madeline: So was I, but Easy believed in me, and now we believe in you.

Easy: No, I don't want to touch this.

Madeline: Hey, I know you're pro-life, but at its core this is a religious bias case. A white woman never would have been charged with this. Leaving a fetus in a trash can sadly happens a lot, but when the mother is located, she is always charged with unlawful disposal of a fetus. Never murder. Ever.

Easy: They also charged her for feticide.

Madeline: That just shows how badly they wanted to railroad her. Feticide laws are designed to protect pregnant women from attackers. They're never used against the woman for ending her own pregnancy. Ever. That shows you how ugly this case is. They threw everything they could at her, and the jury bit. Would you have a problem taking this case if you were pro-choice?

Easy: I can separate my personal feelings from the law.

Madeline: Can you? Because I see a Muslim woman who got a 25-year sentence as a pro-life statement, and I'm not gonna stand for it.

Easy: And I see a woman who threw her baby in a trash bin. I'd rather work on other cases.

Madeline: Fine. I'm taking this case. I'll do it alone.

It is almost ironic that such a show takes place in Illinois, where currently in real life the legislature is considering a bill dubbed the Reproductive Health Act. Illinois already is one of the most permissive states on abortion in the country, and is likely to become even more radical. And, in many states where they have made their abortion laws even more radically liberal, such as New York this year, feticide homicide laws have been overturned.

The opening scenes are far from the only instance in which generalizations about pro-lifers wanting to make examples out of women are made. The insistence that Bukhari was given such a sentence because she was a Muslim woman also persists throughout the episode. When Bodie, Madeline’s investigator, is basically blackmailing the father of Bukhari’s baby to testify, he tries to appeal to the man by lamenting “that she's basically facing a life sentence because of her religion. And to make some anti-abortion statement.”

Easy eventually joins the case, after a genuinely touching conversation with his pastor about showing Bukhari kindness and mercy. The scene is all very nice, except it is overshadowed by such ridiculous tropes, including how pro-lifers are violent people who would judge and dump fake blood on women and can’t distinguish between an abortion and a miscarriage. In reality, pro-lifers want to help women, those who are pregnant and post-abortive, and offer them resources rather than throw them in jail for 25 years.

That Illinois is much more liberal than Indiana on abortion laws means it makes little sense for them to do such a venue change. Unless it was purposefully done to lead us to what is perhaps the greatest offense, the portrayal of Judge Bryant, who, it just so happens, looks very much like Supreme Court Justice Neil Gorsuch.

Bryant is regarded as “the most conservative of all the Christian conservative judges.” It’s also looked upon with disdain that he “interpret[s] the law strictly as written.” Not only is he an old, white, Christian, pro-life strict constructionalist, he’s so biased in the case that he doesn’t even let the deputy prosecutor speak most of the time because he does her job for her.

Just as Madeline might be getting somewhere with her witnesses, Judge Bryant makes statements such as, “it's also possible the baby was born alive and died from neglect” and “do you know if the defendant bought more of the abortion pills online?”

Even after acknowledging Madeline gives “a moving closing argument,” Judge Bryant ultimately lets his bias get in the way of the request for a new trial.

Madeline: Shame by itself is not a crime. But shame is the issue here. The shame of a young woman, barely past her teen years, who felt she had to hide her pregnancy. The shame of deciding whether to keep a baby she might not want. The shame of hiding the identity of that baby's father to protect him. Sarah Bukhari made mistakes. And for those mistakes, she had her whole life taken from her. She's being used as a tool for political advocates to punish women for having an abortion. When the sad irony is, she didn't even have one. If protecting life is the goal of the State, why aren't we protecting a woman's life as well? Denying Sarah her freedom would not only be a lost opportunity at righting a great wrong. It would place the greatest shame upon us all.

Judge Bryant: Ms. Scott... ...That was a moving closing argument, but I have a different view, and that is, all life is precious. Terminated pregnancies are seen as murder to tens of millions of people in this country. Murder of a life that has no means of defending itself. When a woman gets pregnant, she becomes God's partner in creation. Whether your client had an abortion or simply failed to see a doctor, which she admits she did not, she did not protect that life. Maybe she was filled with shame, but a greater shame is, her unborn child never even stood a fair chance. Therefore, I am denying your motion for a new trial.

Deputy Prosecutor Molina: Your Honor, the State has agreed to allow the petitioner to plead guilty to unlawful disposal of a fetus, and requests she be released immediately for time served.

Judge Bryant: Now, you listen to me, little lady...

Deputy Prosecutor Molina: The petitioner's evidentiary showing throughout these proceedings has led the State to believe the defendant has served her time.

Madeline: And if the State rejects this plea offer, I'll appeal this all the way to the Supreme Court. I'll never go away, Your Honor.

Judge Bryant: That I don't find hard to believe.

Judge Bryant: That's fine, Deputy Prosecutor, and I look forward to seeing you again in my court.

Deputy Prosecutor Molina: As do I, Your Honor.

Judge Bryant: Defendant is released based on the plea deal and time served. May the Lord save her soul.

Madeline: You hold your head up.

Ultimately, it’s a woman of color who does the right thing by taking up the deal Madeline had offered her earlier, and puts the judge in his place. Because of course it is.