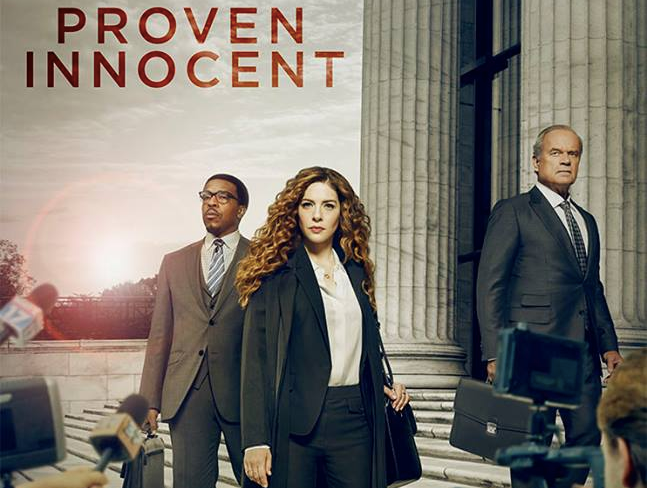 Proven Innocent, the latest Fox drama, aired its Pilot episode on February 15. The basic premise of the show seems edgy and clever, but it quickly devolves into the usual tired and worn SJW tropes.

The title is the name of a podcast run by one of the employees of criminal defense attorney Madeline Scott (Rachel Lefevre), who was wrongly convicted of murder in the first degree of her best friend and spent ten years behind bars along with her brother, Levi Scott (Riley Smith). While she is now a free woman, Madeline must deal with reliving the trauma of those ten years in prison while defending others she thinks were wrongfully convicted.

In one case, the estranged husband of a woman whose conviction Madeline is trying to get overturned turns out to be an illegal immigrant who is afraid of ICE and refuses to testify because of concerns he’ll be deported if he comes to the courthouse. Of course, he comes from a dangerous place so if he's deported, he'll be killed in his home country. Seriously, does every show have to include the illegal immigrant storyline?

Easy: Your Honor, my investigator has been assaulted. May we ask for a recess until tomorrow?

Judge Speer: My Lord, you look like hell. Adjourned until 9:00 A.M. And, Ms. Scott, I hope you're a bit cooler when you come back in this room, or I will kick you right out.

Madeline: Are you okay? What happened to your face?

Bodie: Rincon's undocumented, he thought I was from immigration. After he realized I wasn't ICE, he finally started talking. And he didn't write that statement, and he never turned against his wife. Their entire motive is falsified on that forged statement.

Bodie: No, no, no, because if he shows up to court, he's gonna be deported, and he says if he gets deported, he'll be killed as soon as he gets home. I mean, he already disappeared.

Madeline: We need to prove that translation was purposely faked.

Madeline's wrongful conviction as well as the other two in the first episode were all prosecuted by one district attorney, Gore Bellows (Kelsey Grammer). This man is not only incompetent and corrupt, but white, old, and male. Bellows also does dealings with incompetent and corrupt people, including an interpreter he employed to falsify statements. Who knows how many false convictions resulted from this interpreter’s actions? If this is what our criminal justice system is supposed to be like, then there is no hope with all this corruption. At least the show takes place in Illinois, which has seen the likes of such incompetence and corruption before. Bellows should fit right in there as he launches a campaign for Attorney General.

Greta Bellows: Don't be nervous, honey. You're gonna crush this.

Bellows: We don't have enough of a presence in Springfield. The numbers are still too low downstate.

Greta Bellows: We've got plenty of time, and when we're through, your opponents will be scattered into piles of ashes.

Bellows: Nobody does metaphor quite like you do, my love.

Bellows: It is with great pride and great humility that I announce my candidacy for attorney general to the great state of Illinois. If elected, I promise to enforce law and order, ensure that no crime will go unpunished.

Ezekiel ‘Easy’ Boudreau: So that's what he was up to.

Madeline: We can't let that happen.

Bodie Quick: Hey, if you go after him in the press, it'll come across like revenge.

Madeline: Not if I do it in court.

Violet: What are you talking about? You want to sue him?

Madeline: No, expose him. You know Harvey Birkbeck and I aren't the only two innocent people he's thrown in jail.

Ezekiel ‘Easy’ Boudreau: And there'll be a heck of a lot more, if he's elected attorney general.

Madeline: Exactly. We need to sink his AG campaign before it begins. Let's find another one of his wrongful convictions-- something really high profile-- and jam it down his throat.

Ezekiel ‘Easy’ Boudreau: Are you sure you want to poke the bear?

Madeline: No, I want to rip his heart out. How many innocent lives has he destroyed? This man doesn't get to be attorney general.

Madeline is true to her word in the second episode, "The Burden of Truth," which airs February 22 on Fox but is currently available on Hulu. While sitting down for a television interview, she lambasts the amount of wrongful convictions, claiming they're "skryrocketing" and that "lazy, sloppy, corrupt prosecutions are the reason," with people "suffering in silence because of [Bellows] incompetence."

Not only is Bellows portrayed to be “the white knight state's attorney [who] is really a corrupt liar,” but Madeline and her employees are just so awesome! They sing along to “late '90s feminist alternative rock,” specifically Meredith Brooks’ “Bitch,” after all.

While the legal team may be a multiracial gang of woke SJWs, that doesn't mean it's paradise for the main characters. Issues in Easy's marriage are revealed by the second episode. He comes home late for dinner one night on account of work. As he and his wife, Irene (Shanesia Davis) argue about it, Madeline's race becomes an issue.

Irene: You asked me to make dinner arrangements. You did. Not Me.

Irene: We invited him over so that you could know who was driving your daughter to ballet. So that you could have an inkling of what was going on in her life. I mean, it's bad enough that you forget about us, but now you've let the whole world that we are still an afterthought to the redheaded princess.

Easy: Come on. This has nothing to do with Madeline.

Irene: At dinner, Chuck asked me why your first wrongful conviction was for a white girl. Ten years later, people are still asking me the same thing. Our prisons are filled with our brothers and sisters, and you have given up your career for Madeline Scott.

Easy: Because hers was the highest profile case that made the most sense! I mean, what do you think, I'm in love with her or something?

Irene: Oh please, I stopped worrying about that skinny little bitch years ago. What I care about is how you avoid your family. How you won't even talk to me anymore, not even about your cases.

Easy: Because they're too painful and I want to forget about 'em when I get home.

Irene: Okay. So why are you even doing this?

Easy: Because I'm not practicing boring reinsurance law anymore. I have famous politicians and reporters wanting something from me, attacking me and trying to be my friend. I am in the game now, baby. Making a difference in the justice system. How many black lawyers get that chance? Now it's gonna take a sacrifice from all of us.

Irene: I want to be a part of your life again. We all do. I know you don't like to hear me say this, but I really think you need to see someone.

Easy: No. Absolutely not.

Irene: Well then you better do something, because this is not working.

Reviews of the show were mixed at best, with some of them downright brutal. The Hollywood Reporter says, “Fox's attempt to do an Innocence Project-style legal drama suffers from one-dimensional villains, a confused approach to its heroine and trying to be too many different shows at once.” A title from Indie Wire reads, “Fox’s Legal Series Should Be Held in Contempt of Self-Respecting Courtroom Dramas.” And the Chicago Tribune, writing from where the show is supposed to take place, writes, “Fox's new Chicago-shot legal drama can't muster much of a case.” There’s also the dismal 10% rating on Rotten Tomatoes. Lucky for the show, the 10 reviews (9 rotten, 1 fresh) don’t make for a consensus yet.

Madeline and her brother may have been proven innocent, but the verdict is not clear as to how the show will fare this season or beyond.