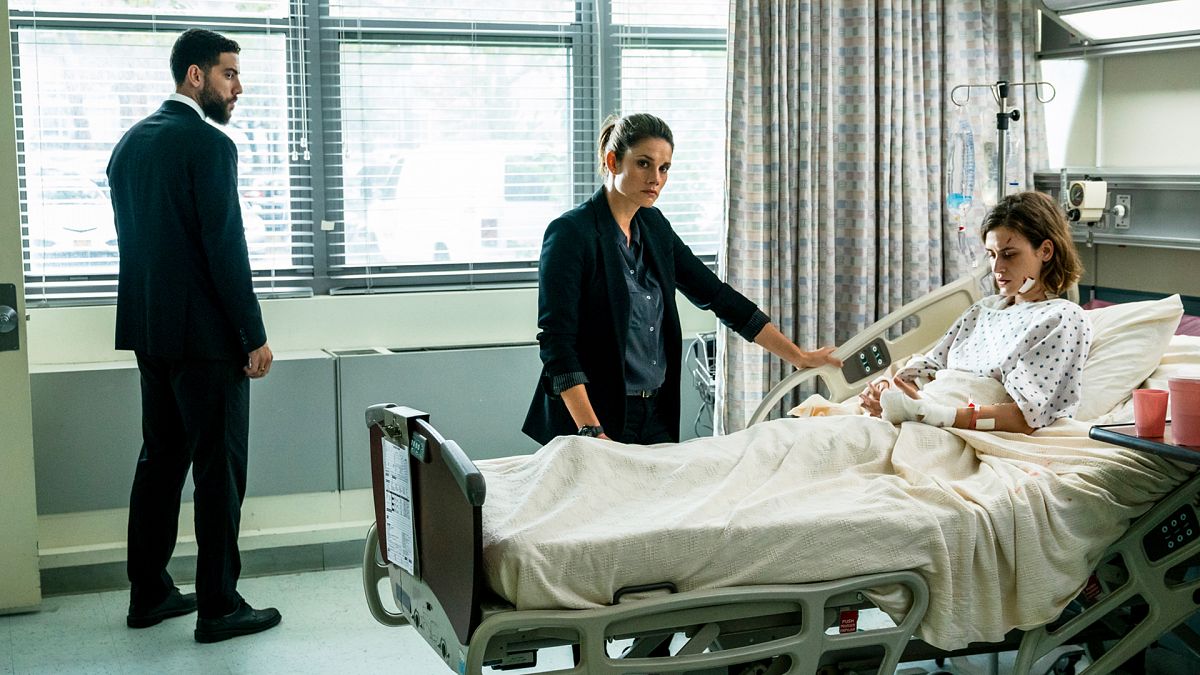 On the October 9 episode of Dick Wolf’s FBI on CBS, “Prey,” FBI Special Agents Maggie Bell (Missy Peregrym) and Omar Adom ‘OA’ Zidan (Zeeko Zaki) are tasked with investigating the unsolved murders of 18 young women. The women are discovered to all also have been victims of a sex trafficking ring still in operation, but, instead of just focusing on the plight of these victims, FBI chooses to flaunt the debunked “one in five women are sexually assaulted” figure, repeating it four times!

It’s a difficult case, especially as 20-year-old survivor, Hailey, recounts being tortured, raped, and stabbed. She was targeted by the killer for asking for help for her sister, also a sex trafficking victim, who had gotten sick. As Hailey laments, “This is all my fault,” Agent Bell tells her, “One in five women are sexually assaulted. It could happen to anyone.” It’s meant to be a reassuring and touching moment, but it’s puzzling she would choose to spout this debunked statistic, especially when she could have used more comforting words.

Later in the episode, Agent Zidan uses his three sisters and mother as a way to bring up his concern with the one in five stat, which is repeated another three times.

Agent Zidan: Is it really one in five?

Agent Zidan: I have three sisters and a mother. You said one in five women are…

Agent Bell: Yes. One in five.

Got that? It’s one in five. Except it’s not.

Most often we hear this statistic in relation to college campuses, but the Department of Justice actually puts the rate of young women being sexually assaulted at 1 in 52.6. That’s still too high a number, but it’s a much different figure than one in five. It's been exposed as a misleading statistic, whether we're talking about rape or sexual assault prevalence in college or over a woman's lifetime.

As an agent of the FBI, which is under the DOJ, these agents should know better.

Once the bad guys have been apprehended, the agents discuss with each other how the media are more interested in covering the relatively rare phenomenon of serial killers than the far more common crime of sex trafficking. Assistant Special Agent in Charge Jubal Valentine (Jeremy Sisto) and Special Agent in Charge Dana Mosier (Sela Ward), in particular, have further statistics to highlight the difference in focus. I’m sure the irony was lost on all involved.

Agent Valentine: Guess they liked him better as a serial killer.

Agent Mosier: He still is. He just found the perfect job to hide it.

Agent Zidan: People choose to fear the improbable over the possible.

Agent Mosier: You go to sleep at night, do you think about the chance-- that's remote-- of being attacked by a serial killer-- or that it's twelve times more likely the person sleeping next to you would murder you?

Agent Zidan: I guess that was rhetorical?

How interesting, suddenly the agents are interested in the accuracy of statistics as they relate to perception versus reality. At least they acknowledge the (liberal) media’s role in stoking unfounded fears.

The show could have also taken the opportunity to present statistics about and provide tips on recognizing and reporting sex trafficking. For example, since 2007, the National Human Trafficking Hotline (NHTH) has documented over 40,000 cases cases of human trafficking. Just last year, there were 8,759 cases, which included over 7,000 individual victims of sex trafficking. These numbers represent a 13 percent increase in cases from 2016, making it all the more relevant to discuss in an episode dedicated to sex trafficking.

Instead, Dick Wolf uses the FBI as a mouthpiece for debunked liberal talking points.