What if they threw a Winter Olympics and nobody watched? 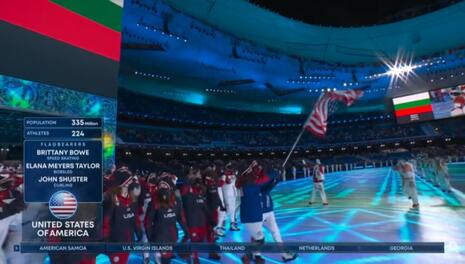 That seems to be the big question facing the Chinese Communist Party and its feckless crap weasel enablers at the International Olympic Committee. This was supposed to be a reassuring PR coup for the CCP, a chance to prove everything is hunky dory in a nation that’s fast reverting to the militarism and mass crime that is the natural state of communist regimes. But Viewership of the Opening Ceremony Friday in Beijing was down 43% across all platforms.

Normally you’d need to have approximately my level of cynicism and misanthropy to ignore the pap and pageantry, the creepy choreography and the counterfeit one-worldism of an Opening Ceremony. After all, the delighted thrill of finding out who’s carrying the Norwegian flag is second only to the testosterone rush of the Men’s Ice Dancing quarter finals.

So either the world is coming around to my jaded, troll-beneath-the-bridge perspective, or the Chinese government is having trouble putting this one over on a world that’s long been content playing  Mr. Magoo to the regime’s crimes.

Let’s stroll – skate – through a list of said crimes:

Western media are pretty understanding and, in some cases, sympathetic to these little Chi-Com foibles, and don’t like talking about them much (nor do the new generations of useful idiots, right King James?). But somehow, word has gotten out. According to Axios, “Including viewership across digital platforms — like NBC’s streaming service Peacock and the NBC sports app — NBC Sports says the event drew 16 million viewers total.” Back in 2018, 23.8 million people watched the Winter Olympics opening ceremony in Pyeongchang, South Korea.

Who knows, maybe viewership will pick up as the games go along. Let’s hope not. It would be nice to think the IOC will think twice the next time a genocidal regime wants a PR stage.