USA Today: In 'Most Disgraceful Moment' of His Career, James Fails to Defend Free Speech 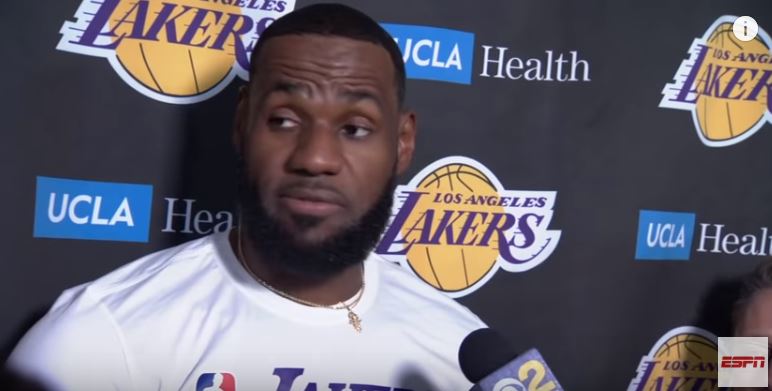 By refusing to stand up for the freedom of Hong Kong against China's oppressive government, LeBron James experienced the "most disgraceful moment" of his career, wrote Dan Wolked at USA Today. Other media joined in the beat-down of the Lakers' superstar, but some excused James' words by turning their venom on America.

On Monday, James (see photo of him at press conference, right) inserted his extra large foot into his extra large mouth by speaking out against Houston Rockets General Manager Daryl Morey, who on Oct. 4 touched off a feud between the NBA and China by sticking up for Hong Kong residents protesting for freedom. James said he didn't believe Morey was "educated on the situation at hand. And so many people could have been harmed not only financially, physically, emotionally, spiritually. So just be careful what we tweet and say and we do, even though, yes, we do have freedom of speech, but there can be a lot of negative that comes with that, too.

"And also social media is not always the proper way to go about things as well, but that’s just my belief," said James, who once tweeted that President Donald Trump is a "bum" and who rakes in a TON of money from Nike sales in China. James also tried to calm criticisms with subsequent tweets. 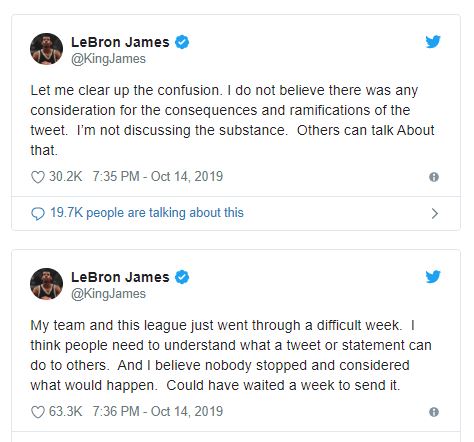 USA Today's Wolken lectured James that 327 million Americans consider it a good thing to exercise free expression in support of a just cause, which James has done numerous times. "Not supporting other Americans who exercise that same freedom because it might personally inconvenience you for a few days overseas, LeBron, is without question the most disgraceful moment of your career."

"Right on, LeBron. Millions in Hong Kong are fearful that their entire way of life is about to change, and thousands upon thousands of protesters are risking their lives to make a stand for their freedom and their future. Why would Morey think about them when your preseason vacation and your bank account is at stake? How selfish of him.

"If only Morey had done what you did Monday, LeBron, and tacitly admit that the only thing that really matters is your ability to sell shoes and market "Space Jam 2" in a country of 1.4 billion, we could have had an intellectually honest discussion about doing business in China and the cost of free speech in a country where only propaganda is tolerated."

The Nation magazine's sports editor, Dave Zirin, said James did not cloak himself in glory. Zirin inserts a tweet aimed at James by former ESPN writer Howard Bryant: “Take the time. Learn. Read. Understand. Do these things especially if your business relationships are going to put you in conflict with your values. We’re all compromised in this game of corporate globalization. LeBron fell for the celebrity trap, talking when he needed to listen.”

Then came the "but monkeys" in Zirin's story. “Of course, if we’re really scoring at home, this country doesn’t really care about human rights, either. It does business with China, it sacrificed black people at home with Jim Crow and abroad in South Africa. It barely punished its Saudi biz partners over the Khashoggi murder.

"One of the tragedies of the last 24 hours is more than just the tarnishing of LeBron’s persona as a progressive icon. It’s also that the worst actors in our politics—the very people who have long been looking to defame James for his stances on racism and police violence—are dunking on his head. Denunciations have rolled in from the Drudge Report, to droves of right-wing trolls, to Missouri Senator Josh Hawley, who brayed about his own time in Hong Kong, where he protested for liberties he refuses to support at home."

Zirin also quotes James biographer Ryan Jones, who said, "The other thing I can’t get past is how awful it is that his most vocal critics on this are guys like Trump-endorsed Missouri senator Josh Hawley. The idea that LeBron’s getting hammered by ‘pro-democracy’ Republicans who are enabling an autocratic takeover of their own country is obviously disgusting, but I guess probably appropriate given the state of things.”