The news surrounding Samaritan’s Purse the last couple of weeks is proof that no good deed goes unpunished, and that even in a massive health crisis, toeing the progressive line trumps all. 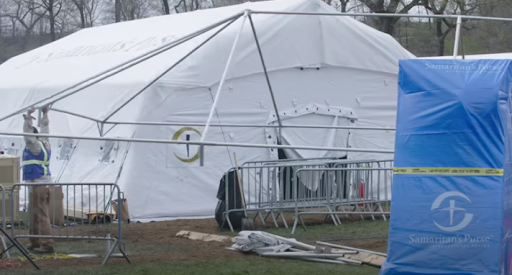 But Thursday night, FNC’s Shannon Bream explained that the Christian charity on the front lines fighting the Chinese virus will finally get some positive reinforcement this Sunday night in the form “Hope Rising,” a streaming concert to benefit the group and the people it’s helping.The show is “aimed at supporting their work while also encouraging you if you are struggling through these dark days,” Bream said.

Samaritan’s Purse is a Christian charity group founded by pastor Franklin Graham. A few weeks ago, the groups set up a tent hospital in NYC’s Central Park to deal with the overflow of virus patients from nearby hospitals. This didn’t sit well with totalitarian LGBT++++ left.

As Graham explained to Fox News’s Laura Ingraham, “We have a statement of faith, Laura, that marriage is between a man and a woman and that goes back to the beginning of time.” He added, “this is our standard for people that we hire. We’re a Christian organization, we’re a religious organization so we wanna hire people of like mind.”

Not. Good. Enough. Lefties woried about “discrimination” in the treatment of patients (apparently, they don’t really understand the “Samaritan” reference, and what a dispicable charge that is to level at people who work under that name.) Protestors actually showed up at the Central Park camp and Democratic Lawmakers like Bill De Blasio promised to look into the behavior of Samaritan's Purse.

But this Sunday night, Christian actor and activist Kirk Cameron and his sister Candace will host “Hope Rising.” Cameron told Bream the concert was “designed to be a night of encouragement.” A collection of Grammy-winning Christian musicians will be “performing from their living rooms, their sofas, encouraging us and praying with us.” The intent, Cameron said, regardless of our faith background or beliefs, is to “bring us together as a nation.”

The concert will be a labor of love, apparently. “My understanding is that every penny of this is going to goto Samaritan’s Purse,” Bream said, “that everybody’s donating their time, the graphics -- the whole thing -- there’s no overhead here. You guys aren’t getting anything out of this.

“That’s right,” Cameron said, “nobody got paid, everything was donated, nobody will be benefiting from this except the Covid victims and those who are supporting them on the front lines through Samaritan’s Purse.”

“Hope Rising” can be streamed Sunday, April 19 at 8pm ET. Even by LGBT people.