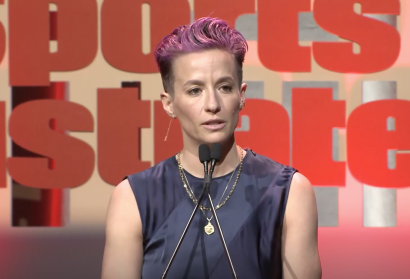 We all have our ways of tuning out the constant drum beat of partisan bad blood and bad news. Some people resort to watching soccer, apparently. Women’s soccer, even.

So it must have been disappointing for those folks when rancor and division intruded on their otherwise tranquil diversion. “Ahead of Wednesday's match at the SheBelieves Cup in Texas, the [US Women’s National] team stood for the National Anthem with their uniforms inside out -- to hide the US Soccer Federation logo,” a March 12 CNN article reported. (That’ll show ‘em, sisters!)

Then after the game, the always lovable US team captain and media heroine Megan Rapinoe explained what she’s currently angry about.

Who said girls are “lesser?” Who said boys that watch women’s soccer are lesser? (Stop laughing!) Nobody really. Rapinoe was upset about a turn of events in a labor dispute the women’s team has with US Soccer. They’re suing the organization, saying it’s unfair they’re paid less than the Men’s National Team to play soccer. Yesterday, US Soccer advanced its argument in the case. CNN:

US Soccer attorneys argued in its court filing that it's not a "sexist stereotype" to recognize the different levels of speed and strength required for the two jobs. Rather, it's "indisputable science" that explains why the men have a greater physical ability to compete at their level than the women do at theirs, the filing says.

CNN was quick to point out that the USWNT “has accomplished more than their male counterparts recently -- winning four World Cups and four Olympic gold medals.” Well, that settles it. Pay the ladies.

Not so fast. Like anything else, “skills” are valuable only in relation to the market demand for them. The women don’t bring US Soccer anywhere near the money the men do. CNN reported that in a separate article earlier in the day, before Rapinoe’s latest antics.

The men generate far more TV revenue. And their workload (measured in tournaments) is greater. Their value (measured in dollars) is vastly greater:

"MNT players have responsibility for competing in multiple soccer tournaments with the potential for generating a total of more than $40 million in prize money for U.S. Soccer every four years," they said. "WNT players compete in only one soccer tournament every four years that has the potential to generate any prize money at all, and most recently that amounted to one-tenth of the amount the MNT players could generate."

Not good enough for Rapinoe, who called the argument “blatant misogyny and sexism.”

“US Soccer President Carlos Cordeiro in a statement Thursday apologized for the pain caused by the language in the court filing.” Of course he did. He may even really feel bad about things. Rapinoe feels bad -- she always does. The only one that doesn’t is the market. And that’s the only one that matters.