Shut Up and Play Ball: Ocasio-Cortez, Media Lash Out at Baseball Team Over Video 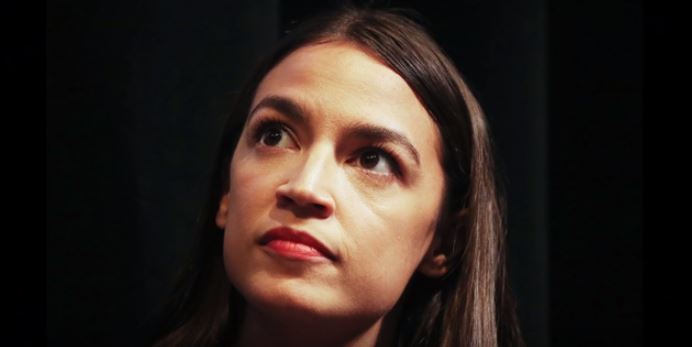 Editor's note: This article has been updated.

Yes there is crying in baseball. In fact, media are melting down because, during Monday's Memorial Day observance, a Fresno minor league team insulted socialist congresswoman Alexandria Ocasio-Cortez (Dem-NY). And for once, Ocasio-Cortez and her media enthusiasts are right to cry, just not for the reasons they think.

Yahoo sports’ Jay Busbee called the video “misleading” and “a subtle bit of propaganda, one completely at odds with the concept of ‘moral courage’ that Reagan spoke of earlier in the speech.” It really isn’t subtle at all. And it doesn’t take “moral courage” to be a petulant and pitiably uninformed poster-girl for statism.

In SFWeekly, Peter Lawrence Kane called the video “bizarre” and turned the attack on Reagan:

Ronald Reagan was a tax-cutting, tax-hiking president who granted amnesty to millions of immigrants, and no one under the age of 52 is old enough to have voted for him, but his presidency remains the focal point of Republican politics. Yet not even Reagan rents real estate for free in the minds of some conservatives the way Rep. Alexandria Ocasio-Cortez does.

Probably because Reagan couldn’t buy the kind of fawning coverage Ocasio-Cortez gets daily from Kane’s colleagues. The rest of Kane’s take was absurdly beside the point, nothing but knee-jerk hate for the Trump administration.

CNN.com says, “Ocasio-Cortez has become one of the most prominent progressive politicians in the US and a regular target of criticism by right-wing media and GOP officials.” That’s certainly the way AOC sees things. According to The Washington Post, “On Tuesday evening, Ocasio-Cortez issued an emphatic response, writing on Twitter that messages like the one in the baseball team’s video are the reason she’s bombarded with death threats and hate-filled calls, emails and social media posts.” 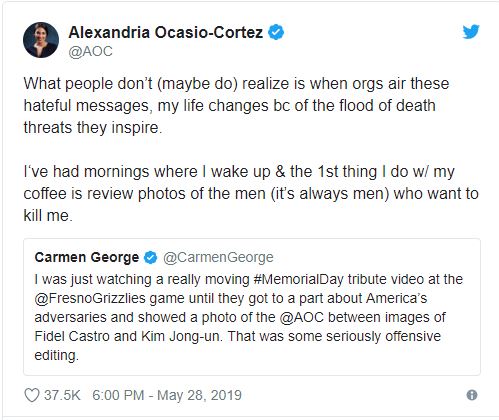 Ocasio-Cortez has made herself the mouthpiece for a fundamentally un-American ideology, one that has a track record of failure, misery and, in may cases, tyranny. She has regularly said the kind of things (untrue, extreme, ignorant) that get the media howling when Donald Trump says them.

Obviously, it’s horrible that she gets threats, and the authorities should track them and punish the criminals who make them. There’s gotta be a special place in hell for those who make threatening phone calls. But Twitter isn’t a nice place. Unfortunately, to take and defend a controversial position on social media is to stir up the fever swamp and poke at things -- left and right -- better left on the bottom. And that goes for everybody. 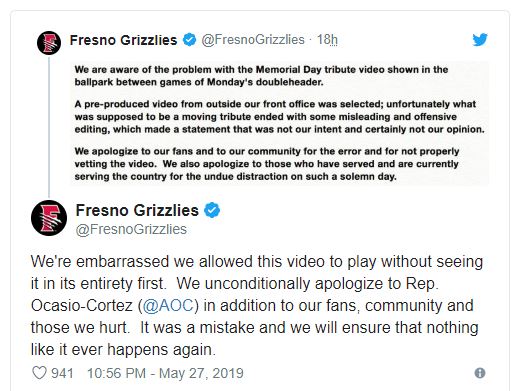 The Grizzlies apologized to Ocasio-Cortez. That’s nice. More important, the team apologized to the ones who really deserve it: the fans who came to the park for some baseball and got politics. They could stay home and watch Fox or CNN for that. Memorial Day should be observed at ballparks and arenas across the country, but it shouldn’t be an opportunity to score political points. No entertainment event should be. So Grizzlies, shut up and hit the ball.