ESPN isn’t just dying the death of a thousand chord cuts. Ratings for the Oscars aren’t down simply because the Academy keeps nominating movies nobody has seen. And it wasn’t just a disappointing U.S. medal haul or NBC’s amateurish broadcast that drove Winter Olympics viewership down 24% compared to Sochi among viewers aged 18-49.

Sure, those all may be contributing factors in dismal ratings for once-thriving networks and broadcasts. But we have more evidence that the relentless politicization of entertainment media is alienating audiences. 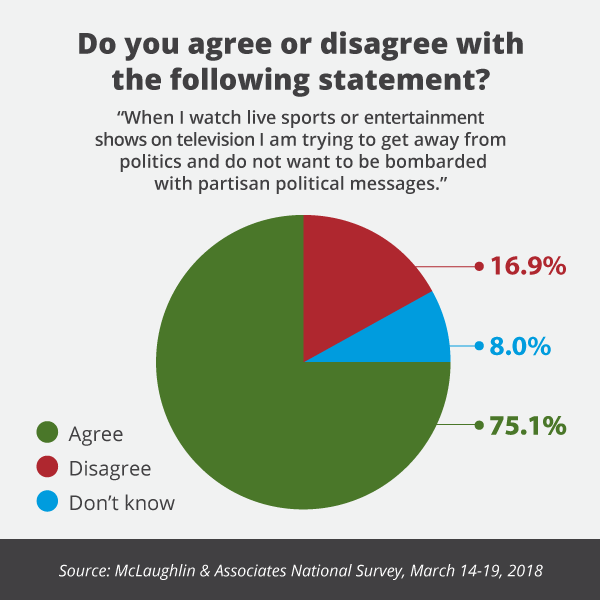 According to new data from a McLaughlin & Associates/Media Research Center national poll of 1,000 likely voters:

75% agree with the statement, "When I watch live sports or entertainment shows on television I am trying to get away from politics and do not want to be bombarded with partisan political messages."

So three out of four people might not be receptive if Bob Costas comes on at half-time to scold the Redskins about their team name, or talk down to Americans about their “gun culture.”

44% said they have been less likely to watch live sports and entertainment shows because they have become too political.

Would-be viewers are skipping ESPN’s “WokeCenter” or any awards show that might include a Streep attack or judges demanding a beauty queen denounce President Trump.

Among people who didn't watch the Oscars this year, the top reason cited for not watching was that they were "tired of these shows being full of political statements."

So those folks missed Best Director presenter Emma Stone getting in trouble for whining that there was only one female director nominated while failing to acknowledge that two of the males were “of color.”

About half (47%) of the respondents who did NOT watch the Oscars this year said their reason for not watching the show was EITHER "I'm tired of these shows being full of political statements" or "I would have watched but knew some of the presenters and winners would use the time to share their political agenda." 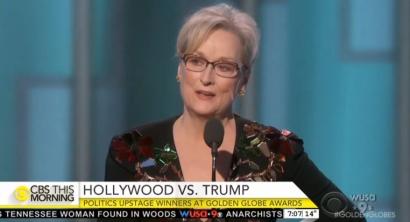 Either way, that 47% was pretty prescient. Had they tuned in they’d have heard host Jimmy Kimmel say Hollywood doesn’t make gay movies to make money, they make them to “annoy Mike Pence.” Or Best Actress winner Frances McDormand calling for “inclusion riders,” an affirmative action program for Hollywood, forcing production companies to ensure “gender and racial equality” on movie sets.

The question remains: why, in the face of evidence that audiences punish political intrusions into their entertainment time, do liberals continue to use their platforms to whine, bully and alienate half the citizenry? Why make a “business case” for an NFL team hiring Colin Kaepernick? Why have Hillary Clinton reading from an anti-Trump book on your Grammys broadcast? Why let Costas anywhere near a microphone, ever?

If the answer is that they just don’t care, former audiences are clearly saying, “right back atcha.”