‘There She Goes Again!’ Conservative Leaders on Hillary’s Grammys Stunt

If you watched the Grammys Sunday night, you’re apparently in very select company. Viewership of the three and a half-hour trashcast was off 24% and scored all-time low ratings in its target demographic. And small wonder. All entertainment awards shows are awful, but few are as vulgar and insulting, and none have less to actually celebrate. 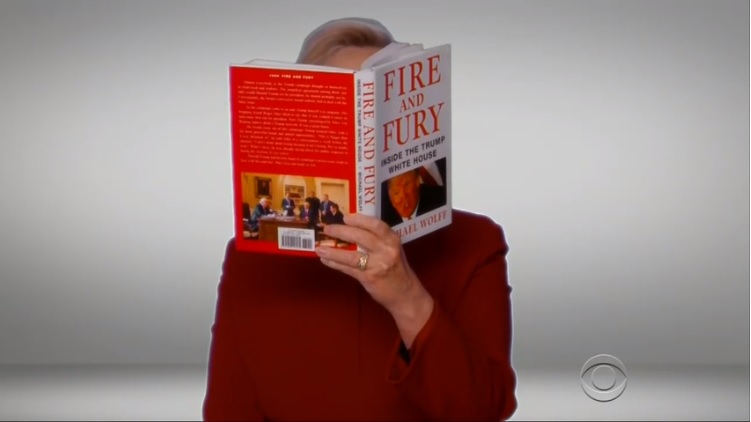 The show was so top-heavy with politics that even quality music would have trouble supporting it. And quality was nowhere to be found (If by next year they don’t have Grammy for Most F-bombs in a Rap Song, it will be surprising.) Instead, there was angry, ill-informed agitprop and endless carping, none of it new or clever.

(It was oddly reassuring to see Bono returning to his old reactionary Euro-leftist form. It reminded your author of a particularly stupid anti-Reagan rant the Irishman launched at the Meadowlands during “Bullet the Blue Sky” in 1987.)

Of course the highlight of the evening was Hillary Clinton joining other celebrities reading selections from Michael Wolff’s slimy tabloid Trump Administration tell-all, Fire and Fury. The audience cheered, and they probably all thought it was very “woke” and a powerful symbol of #resit or something. Truthfully, it was just sad watching Granny try to fit in at the Grammys.

In some ways, it makes perfect sense for progressives to want to politicize the Grammys because the progressive ideology calls for the politicization of everything in society. Politics, and the instrument of the State, is the god of increasing numbers of people who want to place our schools, our health care, our work places, our churches and just about everything else under the stewardship of politicians and bureaucrats. What a sad vision of life and how worthy of opposition.

Seeing this kind of thing from our elites for so long it’s hard to be shocked, but Hillary Clinton reading from a discredited book is a new low. But this is the difference between winning and losing. On Grammy night, President Trump -- knowing how little he sleeps -- was probably working to make the country better, while Hillary was reading from a scandalous book. I think it shows the wisdom of the voters.

Hillary Clinton reading a book that has been widely discredited as tabloid fodder turned a celebration of artistry and music into the sham political virtue signaling that makes people turn off their televisions. No wonder the Grammys ratings were at their lowest point ever. Clinton should be ashamed of her participation in spreading the book’s rumors that U.N. Ambassador Nikki Haley “slept her way to the top.” Couple this with Clinton’s recent refusal to fire a staffer over documented claims of sexual harassment and you have the abject hypocrisy of the left at its worst.

Hillary and the Democrats are still in shock that Mr Trump won the election and they have not yet developed a coherent plan for how to retake the White House. Using the Grammys for a platform to express her hurt feelings about losing is just bad form and reflects a woman who is suffering from a serious case of bad manners and poor decorum. She is part of the Hollywood crowd and has let them drag her into a very disgraceful position of mimicking their behavior. Maybe they did not have to do much dragging at all but she is nonetheless making a complete fool of herself and acting like a child who didn’t get the present she wanted for Christmas.

To paraphrase a great man: There she goes again!

These Hollywood folks live in a bubble world. People who do watch want to be entertained, and Hollywood folks attacking Trump and conservatives in front of an auditorium of people that agree with them is the opposite of courage. It just further divides the country. But they can only live in their bubble as long as they have an audience. With the rise of Netflix and other digital platforms, these folks may soon see they need America a lot more than America needs them.