In Wash Post, the Business Case for Hiring Kaepernick. No, Really!

UVA’s Darden School of Business is at the forefront of popularizing a new, cutting edge business model: antagonize your best customers. Turning the laws of commerce on their head, Darden professor Morela Hernandez and MLB candidate Joseph (Sonny) Siragusa, are arguing that, long-term, flipping off America is a growth industry. 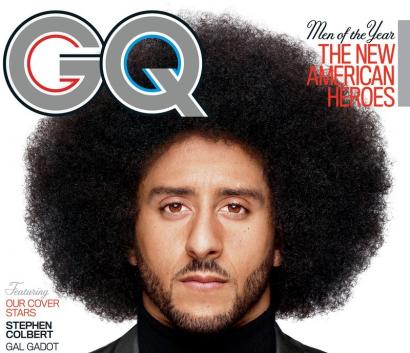 At issue is erstwhile NFL QB Colin Kaepernick. Every lefty worth his fair trade latte thinks Kap deserves -- nay, has a right to -- a place in the NFL. But in a piece in The Washington Post, Hernandez and Siragusa give something like a business reason to give him a job.

As most people know, a couple of years ago, Kap grew bored with playing pro football and decided to pursue a side career as a race-pimping jerk -- refusing to stand for the national anthem, showing off his cops-are-pigs socks and his communist mass murderer fanboy wear. Meanwhile, his pretty good QB skills had degenerated to mediocre, he lost his starting job and opted to leave the 49ers for the (irony alert) free agency market.

Being that he angered at least 50 percent of NFL fans, nobody wanted him, even after he said he’d stand for the anthem for any team that would employ him (principles!).

Yes, average fans hated him, or at least resented him and the players who mimicked his anthem antics as a distraction.

But the rejection of normal Americans guaranteed Kap would be sainted by the sports media types, social justice warriors and guilty white liberals everywhere. He gave money to all the right charities (including a group named in honor of a convicted cop killer hiding from justice in Cuba), filed a stupid grievance against the NFL, and received all kinds of awards from progressive media. That’s all good for him. But the league he’s demanding to play in has dealt fecklessly with the kneeling malcontents and other issues, driving ratings and attendance down.

Enter Hernandez and Siragusa. What the NFL needs is more cowbell, er Kaepernick. The league needs to leverage Kap’s “personal brand,” which is Coca-Cola meets Nike meets Disney to lefties.

Is there an upside from Kaepernick’s activism and personal brand? Might a choice for Kaepernick — even as a backup QB — be seen as a socially progressive stand, distinguishing one franchise from the other 31 to a new, diverse, and younger audience? Could a team become an “employer of choice” in a league where African American talent dominates?

Written like a couple of guys who don’t know anybody who gives a rip about the anthem, or spending a Sunday unsullied by politics.

So, if you’re an NFL team out there, think of all the malcontented -- or at least distracted -- players you can attract to your “woke” franchise, while at the same time alienating the fans who allow you to pay their salaries. (And if those athletes are the social justice-minded true believers you think they are, they’ll agree to a healthy pay cut. “For the cause.”)

But one day those millennials will get their act together and start spending cash like the fans you lost. And besides, you'll have the consolation of being "socially progressive."