Lena Dunham Donates Proceeds From Wardrobe Sale to Planned Parenthood: ‘The Cause Is Urgent Now’

On July 10, Lena Dunham announced her intent to sell a significant part of her wardrobe. As an advocate for so-called “women’s rights and equality,” all proceeds will, of course, go to abortion giant Planned Parenthood.

According to a piece in The New York Times, “169 pieces from her wardrobe will arrive on the RealReal, a website for fashion consignment. She will donate the entirety of her 70 percent commission from the sales to the Planned Parenthood Federation of America, one of her favorite organizations.”

“The time felt right to disencumber herself,” the NYT article continued. “The cause is particularly urgent now … as Congress considers legislation that will have a direct impact on women’s health.” Dunham told the NYT that “Planned Parenthood’s never been more essential.”

Dunham tweeted about her planned donation of wardrobe proceeds July 10, right on the heels of the NYT piece, as well as an article in People Magazine on her “wardrobe cleanse.” 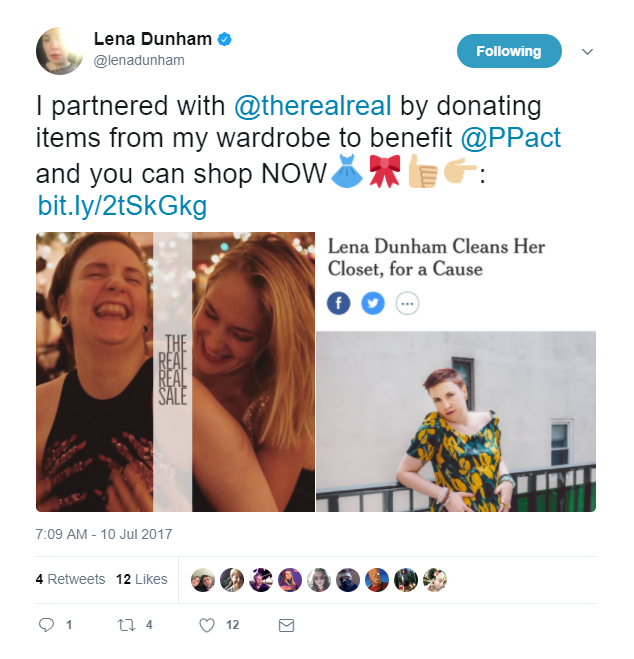 Planned Parenthood has recently launched a massive PR campaign in light of the recently proposed American Health Care Act, which would cut government revenue (now $554.6 million), inviting individual donors to contribute to the abortion giant. And Dunham jumped on board, tweeting and writing about Planned Parenthood’s allegedly universal necessity (the organization serves less than 1 percent of the U.S. population).

If Dunham is as passionate as she claims to be about the ‘protection of women’s bodies,’ perhaps she should note that sex-selection abortions are becoming increasingly common around the world, including the U.S. In spite of popular rhetoric on women’s rights, Planned Parenthood advocates like Lena Dunham continuously champion unrestricted abortion access. Studies reveal loosening these restrictions only contributes to abortions based on gender -- a type of ‘choice’ researchers from Johns Hopkins University to the Charlotte Lozier Institute have condemned as “unethical.”