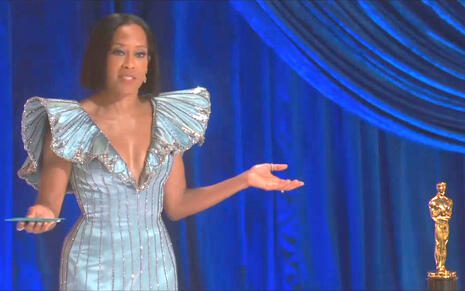 The 93rd Annual Academy Awards kicked things off with actor/director Regina King, representing her film One Night in Miami. She was there to introduce the nominations for Best Original Screenplay, but in true Oscar fashion, she started by bringing up the George Floyd murder trial and protests in Minneapolis. She even lectured viewers who loathe Hollywood preaching, claiming, “As a mother of a black son,” she needed to speak.

King: Ooh. Live TV. Here we go. Welcome to the 93rd Oscars. [ Cheers and applause ] Oh, Jesus, I made it. It has been quite a year, and we are still smack dab in the middle of it. We are mourning the loss of so many. And I have to be honest, if things had gone differently this past week in Minneapolis, I may have traded in my heels for marching boots. Now, I know that a lot of you people at home want to reach for your remote when you feel like Hollywood is preaching to you. But as a mother of a black son, I know the fear that so many live with, and no amount of fame or fortune changes that, okay?

Lecturing the audience still willing to put up with your nonsense is not going to win you any more viewers, ABC, no matter what the Los Angeles Times tells you. Between that and Regina King’s further attempts to explain away Hollywood’s hypocrisy for not wearing masks while the cameras are on, the show was already faker than the movies.

Unfortunately, that was not the only racialized moment of the night, not by a long shot. Actor Daniel Kaluuya accepted the award for Best Supporting Actor for the movie Judas and the Black Messiah, a film following the life of Black Panther leader Fred Hampton. After a mostly rambling speech, Kaluuya managed to squeeze in a shoutout to Hampton ("What a man!") as well as praise for the Black Panthers in general, using the usual spiel about how they “feed kids breakfast.” As if that makes up for the countless violent acts.

Kaluuya: And to chairman Fred Hampton, bro, man, man. What a man. What a man. How blessed we are that we live in a lifetime where he existed. You know what I mean? Thank you for your light. He was on this Earth for 21 years. And he found a way to feed kids breakfast. Educate kids, give free medical care. Against all the odds, he showed me, he taught me, him, Huey P. Newton, the Black Panther Party, they showed me out to love myself, and the black community and other communities. And they showed us the power of unity. When they play divide and conquer, we say unite and ascend.

Finally, in another moment that can only be described as bizarre, even the winners for Best Makeup and Hairstyling got in on the racial moralizing. Sergio Lopez-Rivera, Mia Neal, and Jamika Wilson from Ma Rainey’s Black Bottom gave a speech celebrating Mia Neal and Jamika Wilson being the first black people to win the award period, but then veered quickly off into the preaching: “And I also stand here, as we break this glass ceiling with so much excitement for the future. Because I can picture black trans women standing up here, Asian and Latina sisters, and indigenous women. And it won't be unusual or groundbreaking one day, it will just be normal.”

Just take the award and go home already, Hollywood. It's only been an hour - stay tuned to Newsbusters for more Oscar coverage!