From 'Queer Rights' to 'Animal Rights,' 2020 Oscars Were SJW Dream 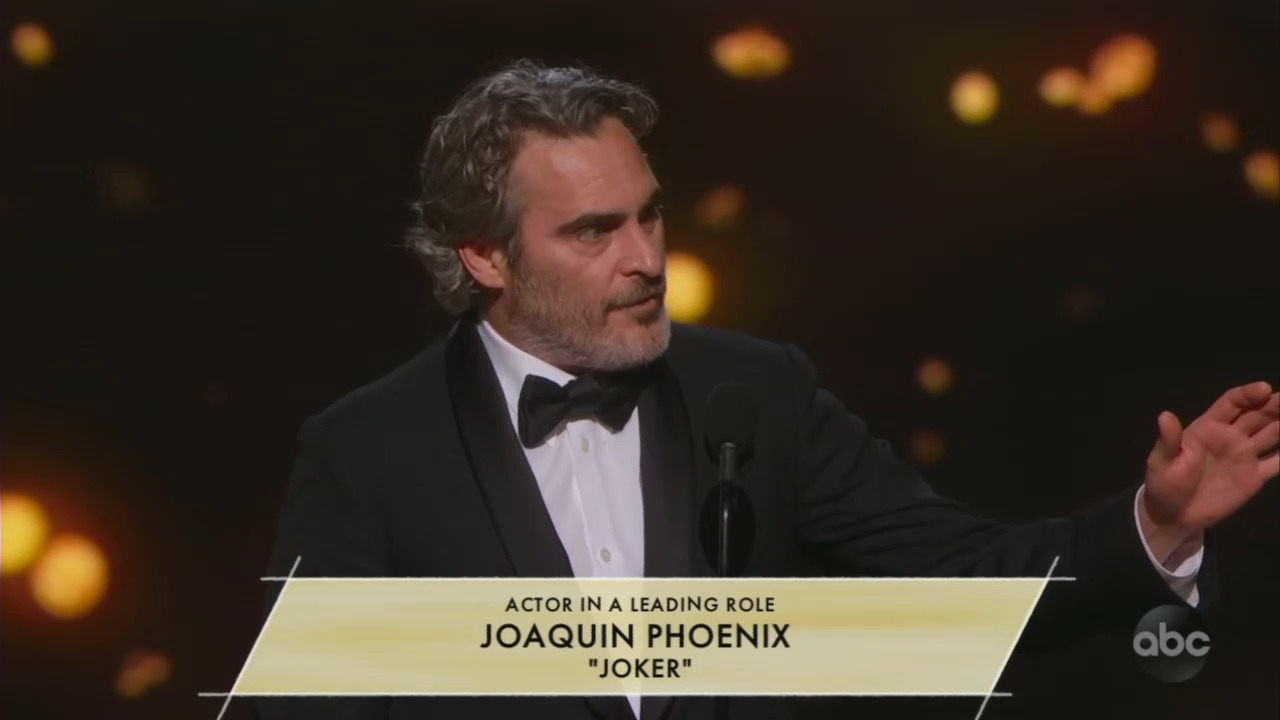 The Oscars, the highlight of the Hollywood awards season, aired February 9 on ABC. This year’s event proved to be much more political than last year, unfortunately. It’s an election year, you know.

The Oscars, was full of woke messaging, there is no other way to describe the unrelenting hot takes delivered by the Hollywood elites. From political statements woven into acceptance speeches to political messaging in fashion, there was plenty of finger-wagging to go around.

Joaquin Phoenix won for Best Actor and delivered a long and winding acceptance speech. He went from scolding the audience about social justice issues including animal rights and ended with talk of cancel culture and personal redemption.

Joaquin Phoenix: Hi. What's up? Hi. God, I'm full of so much gratitude right now and I do not feel elevated above any of my fellow nominees or anyone in this room, because we share the same love, the love of film and this form of expression has given me the most extraordinary life. I don't know what I'd be without it. But I think the greatest gift that it has given me, and many of us in this room, is the opportunity to use our voice for the voiceless. I've been thinking a lot about some of the distressing issues that we are facing collectively and I think at times we feel or are made to feel that we champion different causes.

But for me, I see commonality. I think whether we're talking about gender inequality or racism or queer rights or indigenous rights or animal rights, we're talking about the fight against the belief, one nation, one race, one gender or one species has the right to dominate, control and use and exploit another with impunity. I think that we've become very disconnected from the natural world and many of us, what we're guilty of is an ego centric world view, the belief that we're the center of the universe. We go into the natural world and we plunder it for its resources. We feel entitled to artificially inseminate a cow and when she gives birth, we steal her baby. Even though her cries of anguish are unmistakable. And then we take her milk that's intended for her calf and we put it in our coffee and our cereal.

And I think we fear the idea of personal change because we think that we have to sacrifice something to give something up but human beings, at our best, are so inventive and creative and ingenious and I think that when we use love and compassion as our guiding principles, we can create, develop and implement systems of change that are beneficial to all sentient beings and to the environment.

Now, I have been -- I've been a scoundrel in my life. I've been selfish, I've been cruel at times, hard to work with and I'm grateful, but so many of you in this room have given me a second chance and I think that's when we're at our best, when we support each other, not when we cancel each other out for past mistakes, but when we help each other to grow, when we educate each other, when we guide each other toward redemption. That is the best of humanity. I just -- I want to -- when you -- when he was 17, my brother wrote this lyric, he said, "Run to the rescue with love and peace will follow.”

Actor Brad Pitt denies that his speech was written by a former Obama speechwriter, he said it was his sincere thoughts. He just had John Bolton on his mind when he wrote his remarks, I guess. Wink, wink.

One surprise, even for Hollywood’s far-left, came during the acceptance speech of the makers of the Best Documentary Film Feature, the Obama-backed American Factory. Winner Julia Reichert quoted Karl Marx’s Communist Manifesto as her vision of a perfect world – “Workers of the world unite!”

Actress Natalie Portman’s attire included a long, black Dior cape. On the cape were the names of women directors stitched into a subtle design, none of whom were nominated for an Oscar. Other women wore specially-made “pro-woman” jewelry.

The Crown Act was brought up during an acceptance speech given by the makers of the Best Animated Short Film, Hair Love. Lawmakers are looking into making it a federal law – it is now a California law that prohibits discrimination based on hairstyle and hair texture. A Houston boy was disciplined by his school for disobeying the dress code which dictates the length of his hair. He and his parents made the dispute into one of discrimination because his hair is worn in dreadlocks, a nod to his Dominican Republic heritage, they say. The school didn’t object to the hairstyle, only the length of his hair. He was a guest of the documentary makers.

One of the commercials featured the singer who opened the show, Janelle Monae. She promoted The New York Times history series, "The 1619 Project," which has been soundly discredited.

Jane Fonda presented the final award for the Best Movie of the Year. She wore a red coat over her arm. The coat is the one she wears during the Fire Drill Fridays protests and rallies she organizes with her celebrity climate alarmist friends. Ugh.

The show wasn’t all bad, though. One heartwarming moment happened and it made everyone smile. Thanks to Shia LaBeouf and Zack Gottsagen, an actor with Down Syndrome, for that moment.

Another Hollywood award season is wrapping up. This ceremony was perhaps the worst of the year with all the political opinions as part of the show. The liberal bubble in Hollywood is alive and well.