Even Liberals Are Disgusted by Amazon Prime Series 'Them'

Another year means another overrated series pushing the theme that since people in America were racist decades ago, America is just as racist if not more so today. 2019 had Watchmen, 2020 had Lovecraft Country, and 2021 has the unusually violent Amazon Prime series Them. 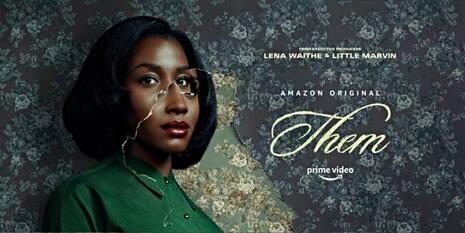 The series which premiered April 9 centers on a Black family known as the Emorys moving to a white neighborhood in 1953 Compton. Malevolent forces quickly conspire against them ranging from their vicious white neighbors to vaguely supernatural threats. All of it adds up to a terrifying situation for the Emorys due entirely to their race.

Make no mistake, pretty much every problem in the show comes from evil white people and racist society. Every white character comes across as insensitive at best and downright evil at worst. Redlining agencies force the family into their situation, neighbors vandalize their house, and, in a flashback, a religious community outright blinds and lynches a black couple. The times before the 1964 Civil Rights Act were hardly progressive for race relations, but this series treats white people like vicious monsters.

And vicious is the right word to describe this series. The show is gruesome when it comes to its racial violence, requiring explicit warnings depending on the episode. The pilot alone features a dog with a broken neck, and it only gets worse from there. Along with the aforementioned lynching, there’s a bloody beating involving two white men and Henry Emory (Ashley Thomas) and a horrifying murder of an infant boy in the middle of a gang rape. The latter was so shocking that even the Los Angeles Times wonders if the series “goes too far.” When you lose some of the media in “white supremacist savagery,” you know something is wrong.

Of course, plenty of other media sites were quick to defend the series despite its violence. Collider complimented the show as “it renders whiteness monstrous in a way I’ve never seen accomplished so thoroughly.” NPR remarks that the show’s obvious thesis that "Racism is terrorism, and it's everywhere; in our entertainment, schools, workspaces, churches, homes" is a “fair starting point for telling a story (or teaching basic history).” The New York Times caps things off with a quote from series creator Little Marvin summing up the horror in just four words: “Welcome to being Black.” “Being Black” is apparently a bigger horror than facing vaguely evil demons. And leftists wonder why we don’t take them seriously.

Them has already been renewed for a second season, likely to involve an entirely different cast, so we can likely mark 2022 as another year for racialized TV. Hopefully it could use a little less blood.