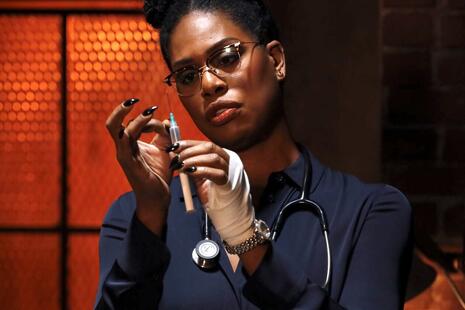 Network TV seems pretty determined to have black people afraid of doctors. NBC’s The Blacklist is only the latest drama to accuse doctors of racism in the middle of a pandemic.

In this case, she uses a Heretic’s Fork on Dembe’s neck. As she applies it, she can’t help but bring up how racism in medicine ruined her mother’s life. It’s as straightforward as it gets, with a forced monologue delivered so melodramatically it's laughable.

Perillos: When I was 12, my mother went to the hospital with a neural infection that was misdiagnosed as a strained muscle. She was given ibuprofen and sent home...with an infection that left her in excruciating pain and bedridden for the rest of her life. What caused the misdiagnosis? The color of her skin. The belief -- even by some doctors -- that Blacks feel less pain than whites. Thick skin, biology, breeding -- lies that lead to Black patients receiving far fewer pain meds than white patients. But we know the truth, don't we, Dembe? We know all about pain, don't we?

In case you didn't get the lesson, Perillos reiterates later that it’s all true, bemoaning, “I wasn't making it up. About the doctors. In 2016, 222 white doctors at the University of Virginia were given mock medical files of a white patient and a Black patient and asked to gauge their pain on a scale of 1 to 10. They underestimated the Black patient's pain because -- now, these are doctors -- they said they thought Black people had less sensitive nerve endings. Why is it that white people don't see our pain?”

Yeah, that's what you want in the middle of your Friday night suspense drama: recitation of studies to make a social justice argument.

First, this study surveyed 222 medical students and residents, not doctors. Second, discrepancies between races does not automatically mean “white people don’t see black pain.” Finally, if the people pushing this message so much really cared, why aren’t they doing anything more than saying doctors will watch black people suffer because bias?

The fact that the show also put this social justice message in the mouth of a sadistic torturer also sends mixed messages. Are we supposed to disregard the biased message since the speaker’s clearly insane? Or are we supposed to sympathize with the near murderer since she must be telling the truth about doctors? I’m worried it’s the latter because that’s how much social justice warriors warp reality.

The bottom line is, doctors are not racist. And TV shows trying to pretend they are in the middle of a pandemic should definitely find something better to do.

This show was sponsored by commercials from McDonald’s, Panera, and State Farm.