'Black Lightning' Finale Claims This Country 'Built by and for Rich, White Men'

As you may recall, Black Lightning kicked off its third season with the “kids in cages” story. Now in its season finale, the CW superhero drama bookends that lousy narrative with a reminder that the United States was founded “by and for rich, white men.” Looks like sixteen episodes haven’t changed the show’s hatred for America. 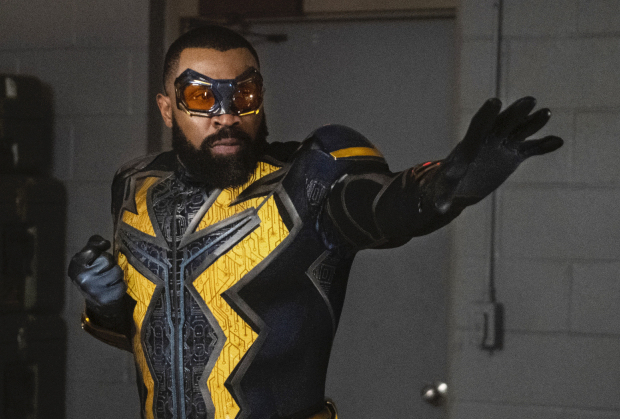 The March 9 finale “The Book of War: Chapter Three: Liberation” marks the final confrontation between our heroes, led by Jefferson Pierce/Black Lightning (Cress Williams), and an invading army, led by the brutal Tyson Sykes aka Gravedigger (Wayne Brady).

For a little background, Gravedigger is a super-powered meta-human who received his powers after being experimented on as soldier in World War II (think an evil version of Captain America). After facing racism and oppression from the military, he came to renounce his country and dedicated himself to the fictional nation of Markovia to one day overthrow the United States. And, despite nearly eight decades passing since then, he still believes America is just as racist now as it was in 1944.

Sure enough, he says as much to his captive, Jeff’s super-powered daughter, Jennifer (China Anne McClain). He even goes so far as to throw Martin Luther King, Jr. and President Barack Obama under the bus for how racist the United States is.

Gravedigger: I have been empowered by the nation of Markovia to establish an independent meta-human state inside their borders. A place where meta-humans can be free. Live normal lives.

Jennifer: Mmm-mmm. You need to sell that trash somewhere else.

Gravedigger: Trash? Little girl, you don't know a damn thing about this country. This country was built by and for rich white men. That's never gonna change.

Jennifer: There's been plenty of change. Not enough, sure, but it's disrespectful to the sacrifices of our ancestors to say there's been none.

Gravedigger: Change. Oh, you mean Obama? And Martin Luther King? Well, seems to me that Obama was bought and paid for by rich liberals and multinational corporations, and Martin Luther King, well, he was a coward who lacked the courage to fight for his own freedom.

Jennifer: Are you insane? MLK was one of the most courageous people to walk the face of this Earth. Not by fighting, but by purposefully putting himself in harm's way. The moral authority of his cause couldn't be debated.

Gravedigger: Yeah, they debated that plenty.

Jennifer: But he was on the right side of history. "Metas are with you, or else." That's not Independence or peace.

Gravedigger: Who are you to judge me, huh? You've been on this planet for the blink of an eye. I'm 100 years old.

Jennifer: Maybe that's why you're so negative and grouchy.

Clearly Gravedigger is supposed to be the bad guy here, but really, he doesn’t seem to hold beliefs any different from the regular progressive today. We’ve had liberals decrying the United States as a racist nation for years. We’ve had liberals believing violence and anarchy to be a better solution than elections. We’ve even had people recently labeling Barack Obama a “conservative” rather than a liberal trailblazer as if the first black president means nothing anymore. As far as ideas go, Gravedigger practically belongs in 2020.

In fact, it’s hard to really tell if the writers even disagree with him. Sure, Gravedigger is a bad guy for killing people, but there’s barely a philosophical push against him. The most we have is an eighteen-year-old high school student sparing quips with him, and the show can’t even defend Barack Obama in that process. Add the normally charismatic Wayne Brady playing the character, and I’m not sure the writers even want to debate whether America is racist or not.

Of course, the heroes eventually succeed, and their city is saved. Unbeknownst to them, however, Gravedigger is still around, likely waiting to exact revenge. Considering the show has been renewed for a fourth season, he just may. And that means we’ll likely see some more jabs at America. Some things, like progressive hatred, never change.