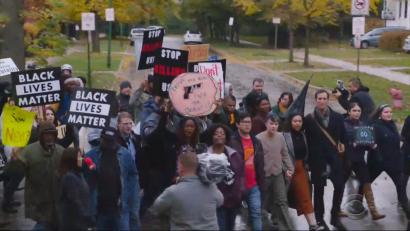 CBS’s mini-series The Red Line is still racking up those intersectionality points at the expense of the truth. If you needed any more proof, just look at the most recent episode outright depicting alt-right white men attacking peaceful Black Lives Matter protestors.

Going further, Jira decides to hold a walkout at her high school to protest police brutality. This protest quickly draws the attention of her father, her English teacher Liam Bhatt (Vinny Chhibber), and city alderman candidate Tia Young (Emayatzy Corinealdi). Altogether, they and the students march through the streets until confronted by Blue Lives Matter counter-protestors and some intimidating white thugs (note one with a red cap).

Reporter: Jira, why are you marching?

Jira: I'm marching for my dad, for Harrison Brennan! Justice now for Harrison! We believe...

Tia: Amanda Sharp needs to see this. She needs to realize it's not about friends or enemies. It's not about sides. Her job is to seek justice.

While this already runs counter to several real depictions of Black Lives Matter protests, it gets worse. A man literally listed in the credits as “Alt-Right Thug” threatens Jira in front of Daniel, leading to an all-out fistfight in the streets between the groups. Of course, it’s the alt-right thugs who start the fight, and of course, the police only arrest Liam, the gay Muslim teacher, for no reason.

Daniel: You called my house!

Daniel: You threatened my daughter! Hey, hey! You!

Liam: You gonna shut us all up?

Liam: I didn't do anything!

Liam: Daniel, get outta here. Stay with the kids!

Tia: Are you okay?

Jira: Where are you going?

Daniel: I'm gonna go make sure he's okay. Can you take her? Don't take her back to our house.

Tia: She can stay with me.

Jira: Come with us!

Fortunately for Daniel and Jira, Liam is eventually released after being held for ten hours. According to Liam, the reason he was held for such a long time was because, “I'm brown. I'm Muslim. I'm gay. And, oh, I was... protesting the police,” in case the police didn’t get enough of a bad rep on this show. Even better for the protestors, the state attorney agrees to reopen the case, confident that Evans will be indicted this time.

The only problem is that this isn’t nearly close to our reality. Black Lives Matter is clearly not always the popular, peaceful movement they're made it out to be. The alt-right isn’t a huge threat attacking high school students but a mostly fringe political group. And the police aren’t racist killers as seen by any look at actual police shooting statistics.

Progressive shows like this try so hard to be inclusive when they only come off as delusional. The world is a little different from a CNN broadcast, and I welcome these writers to join the rest of us in it.